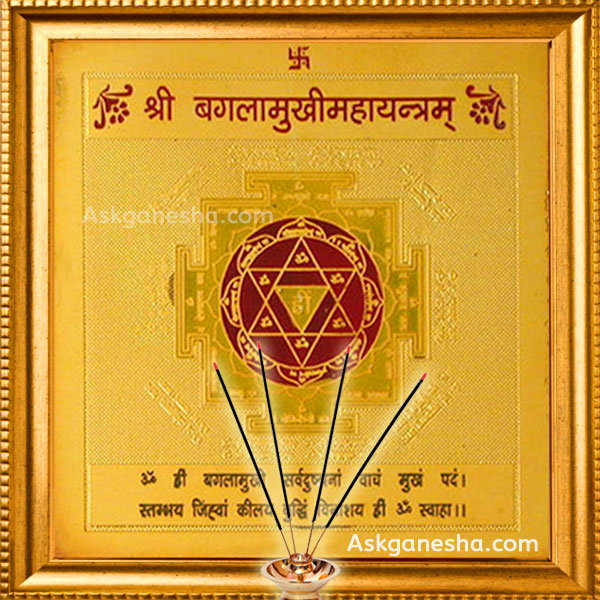 Bagala Mukhi Yantra is for power & dominance over enemies & adversaries. It is a very powerful and useful Yantra for victory over enemies, law suits, success in quarrels and removal of black eye. The worshiper of this Yantra shall have an edge over competition, victory over adversaries, the power to defeat rivals and conquer enemies.

Since disease is also considered a major enemy of mankind, this Yantra also offers protection against diseases, chronic problems and accidents. Bagala Mukhi Yantra also helps the worshiper to achieve success in competitive examinations and to attain victory in law suits.

Baglamukhi Yantra is very effective to ward off the evil effects of souls and Yakshani also to get success in gambling. This is a very powerful and useful Yantra for victory over enemies, law suits, success in quarrels and competitions.

Baglamukhi Yantra is effective as a memo of achieving success over enemies. This Yantra also offers protection for cuts, scars, operations and accidents.

We provide Yantras that are Energized (Pran Pratishta) by learned Purohits, by reciting the Vedic mantra of the particular Devi or Deva along with the Homa done. We provide with the Yantra the complete mantras and methodology for worshipping the Yantra.

I ordered Bagalamukhi yantra when I joined a company and I saw my colleagues becoming my competitors, they often would play politics with me and tried to name my efforts as their own. I did not know what I could do so I ordered Bagalamukhi yantra as I read about it on Askganesha.com. I installed it in my workplace and it showed its magic. Their politics is no more a problem, as I have been promoted above them.

I am in to sports and I obviously have many opponents but I dint realise when they became my enemy and started plotting against me. I consulted Askganesha.com as they made my life impossible. They suggested the use of bagalamukhi yantra and it really helped me to ward off their intentions.

By Mithlesh Pandey, Football player, UP

My son was suffering from one or another disease since he was born and we were very upset with it. I bought Bagalamukhi yantra from Askganesha.com as it is said to ward off evil eyes. With time, his condition improved. Thank you Askganesha.com for your great services.

Bagalmukhi yantra is very genuine and it actually works. I was stuck with a lawsuit from years and did not know if it will ever end. My friend told me about this yantra and I ordered it. I worshipped it every day and within the next two hearings, my case was in my favour and I won it.

I had purchased a land 5 years back which was illegally acquired by someone. I could not get it back as some goons were protecting those people. I filed a lawsuit against them but they seemed to win it anyway. I bought Bagalamukhi yantra which blessed me with good luck and I won the case and my land back legally.