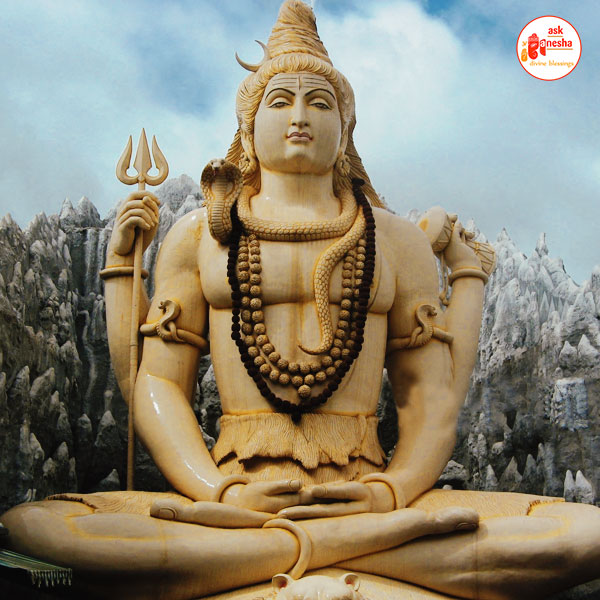 One of the Tridevas, Lord Shiva is the destroyer, who is considered to be timeless, ageless, birthless and deathless. His blessings bring eternal life.

Lord Shiva appears in a meditating but ever-happy posture. He has matted hair which holds the flowing Ganges river and a crescent moon, a serpent coiled around his neck, a trident (Trishul) in his one hand and ashes all over his body.

The Lord's attributes represent his victory over the demonic activity, and calmness of human nature. He is known as the "giver" god. His vehicle is a bull (symbol of happiness and strength) named Nandi.

Shiva-Linga, a sign of the Lord, is adored instead of him. Shiva temples have Shiva-Linga as the main deity.

Lord Shiva - The Dancer Who Recreates

None gave him birth, He knows no Lord. None rules Him in the world, nor yet controls. No features mark Him out, yet cause He is. Prime cause of that which steers, the senses five, the soul within." Shvetashvattara Upanishad.

Around the beginning of this millennium, it is said there was a revival of Saivism and the power of Shiva. By then the idea of Shiva had built into the vedic texts too. He is identified with Rudra in the Rig Veda. Various texts give different versions of his creation and each one they say is symbolic of his many facets. He, Shiva, is the one who has conquered time, for He destroys and re-creates. He, Shiva, is white in colour for white stands for justice in acts of annihilation. He, Shiva, is the one who has conquered death and historically his resurgence from the Pre-Aryan period to the present day obsession is one way of looking at it.


Another story says the Lord of all beings was a householder and of his wife Usha was born a child. The child kept crying so the father questioned him as to why he cried. He said he cried for the want of a name. The father was quick to name him if that could bring some quiet and he was called Rudra, from the rot word rud which means, to cry.

The Linga Purana has yet another version to relate. According to this story, Brahma, the creator had five mind-born sons. Many fathers may be able to sympathize with Brahma, for the father of creation too was dissatisfied with his sons. None of them showed any promise, the typical progenitor felt. He contemplated on Siva for solution. Siva himself appeared and told him He was his son. Siva then assumed the ardhanareeswara form.

The ardhanareeswara is yet another concept that Shiva stands for. In this aspect he draws the feminine into his own self. He is half man, half woman. A symbol of the Samkhya philosophy which talks of Purusha (the male energy) and Prakriti (the female energy) together making the cosmic energy.

As Ardhanareeswara, Shiva destroys the old, for in destruction there is renewal, it cleanses and constructs anew. In this new construction, he is the Father of Brahma. And the cycle of time, the process of recreation begin all over again.

In successive kalpas, or age, Shiva donned five roles. The five-form concept later took shape as the Panchamukha Shiva or Five faced Shiva with each face given a direction – the dimension of space had thus been added to the dimension of time. As Sadyojata he faced East, as tatpurusha he faced north, as Aghora he faced west and as Ishana he faced south. As Sadesiva (Eternal Shiva) he was looked above; symbolic of him being above all space. In the Linga Purana, Vishnu described Sabasiva as a pillar where the Ishana was the crown, Tatpurusha, the face, Aghora the heart and Vamadeva his sex organ and Sadyojata as his feet. The metaphor had been gathered into a manageable symbol and while many other stories exist for the worship of the phallic symbol of Shiva, this was the beginning.