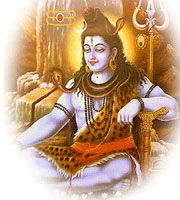 A story is told located at the legendary ashram of Daruvana. Today some say it is the same place as where the Jageswar temple in Almora stands on the lower Himalayas. Here, some sages were engaged in penance. To test their dedication, Shiva began dancing in the forests. The wives of the sages who had gone to collect firewood remained transfixed. At sundown when the sages cam in search of their wives and caught sight of a man dancing to the joy of their wives, they cursed him, not knowing he was Shiva himself.

By the curse, his penis fell to the ground and rose with the brilliance of fire in both directions. The earth trembled and Vishnu and Brahma came to look for solutions. They each went south and north respectively in search of its end, but could not find it; symbolizing both infinity in space and eternity in time. Shiva was then accepted as Supreme by both Brahma and Vishnu and he withdrew.

(Being of the same rank, there are many stories on the quarrels and disputes between Shiva and Vishnu, their assertion of superiority one over another is a debate even today amongst their followers!)


Shiva married twice, once the granddaughter of Brahma, named Sati and then Sati again when she was reborn as Parvati, the daughter of the King of the Himalayas, Daksha. He had two sons, Ganesa and Kartikeya.

One of the derivations of the word Rudra denotes running and constant movement, the pulsation of life, its steps. Therefore Shiva is also perceived as the Cosmic dancer, Nataraja. The magnificent Nataraja who dances though life has won many a hearts and imaginations. Many temples have been built to the Lord Nataraja across Kanakasabha (golden hall) at the temple of Chidambaram.

Of Shiva, one can not write and stop. There are sixty-four lilas or sports in which he is said to have partaken and infinite stories from his tumultuous marriage to his drinking of the poison during the famous incident in Hindu mythology of the churning of the ocean. Through all the myths Shiva emerges the same, powerful, impulsive, angry, frightening, charming, one who holds the damru (drum) either sides of which makes our night and day and one whose ankle bells are the source of all sound. To write on Shiva is as continuous a process as the idea of Shiva himself.

Read a famous story about: