Aries All About Horoscope

Aries All About Horoscope


Aries sun sign comes first in the zodiac wheel and that is actually how they see themselves: FIRST!

Being a Cardinal sign, Aries are known as the initiators or leaders. However, their task is limited to only that, initiation. Would the task be done is an entirely different question these people do not bother about. They prefer to initiate.

Hence, those born under Aries sun sign have often gone to become pioneers in a certain field. Kofi Annan, Elton John, Eddie Murphy, Leonardo Da Vinci and Vincent Van Gogh are some famously known Aries personalities who were all fearless trekkers in an uncharted territory. To top the dynamism of Aries, is their energy and magnetic personality. People cannot resist following them.

The symbol of Aries zodiac is the Ram. On one hand, this may tempt them to ram their opinions down people's throats, and on the other, this helps them accomplish great things which others can never think of. For that ferocity, one might wish they had a more subdued personality of a lamb than of a full grown ram. This strong behavior extends to their thought process and tongue too, as they are often seen blunt with their words.

Aries is ruled by the planet Mars, the Roman God of War. This is precisely the reason why those born under Aries zodiac sign are bold, aggressive and brave to a fault. Like a warrior, they summon up their inner strength and take on most anyone. With the exuberant energy, they can stay on the field longer than anyone else which gives them a winning edge.

The physical traits of these Rams include presence of strong, sharp facial features, a tanned and rugged complexion with an active body constantly moving in graceful strides. They are often found sporting red, which is also the color of their zodiac sign. 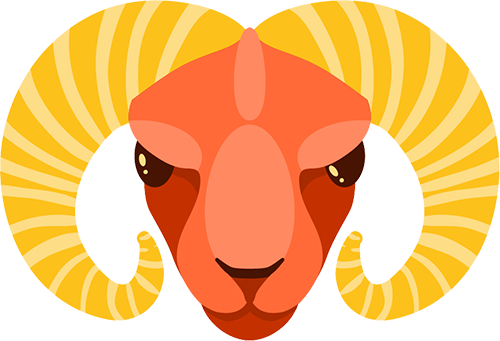 Astrology Predictions for All Sun Signs