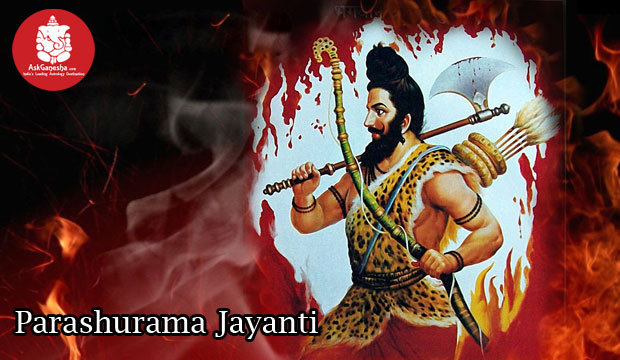 The upcoming schedule for Parshuram Jayanti is on dates: 01 January, 1970

Parshuram is the sixth incarnation of Lord Vishnu. He is the son of Renuka and one of the saptarishis, Jamadagni. Parashu means axe and Parashurama – the axe wielding Rama. This weapon was used by him to ease the Earth's burden by killing the sinful, destructive and irreligious monarchs. He was born on the third day during the waxing phase of moon in Vaisakha month. Parshuram has been mentioned in Mahabharta, Ramayana and the Puranas. He is the epitome of bravery, loyalty and attachment towards parents.

On this festival, perform Vishnu Sahasranam

One day, his father, Jamadagni, had a fight with his wife, Renuka. His father got angry at his wife for some matter. He lost his control in the anger and he ordered his son, Parshuram to kill his mother. Although Parshuram was in hesitation, but he had always considered the order of his parents above everything, he killed his mother. Somehow, Parshuram was able to get and bring back the life of his mother and that is how he proved to be true followers of his parents.

One other story states that, one day Parshuram was going to meet Lord Shiva. But Shiva had ordered his two sons Ganesha and Karthikey to not disturb him for sometime. When Parshuram reached there, he was stopped by both kids of Lord Shiva. Parshuram got angry and in anger he was about to attack Lord Ganesha by his weapon. Soon Ganesha realised that the weapon with which Parshuram is attacking is gifted by Lord Shiva and decided to not to insult the weapon by hitting his weapon against him. So, the weapon of Parshuram hit the Lord Ganesha's one teeth. Due to this, a small part of lord Ganesha tooth got broken