The invincible Superheroes of Smite video game has Indian Gods 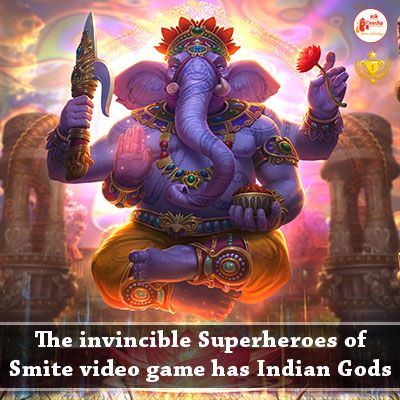 Isn’t it unbelievable? When most millennials are confused about their culture and origin, an international game developer Hi-Rez Studio published a multiplayer online battle arena (MOBA) Video Game, which has Indian God and Goddess characters.

Interestingly this international game developer has explained Hindu Gods as:

They have introduced Hindu as those who believe in rebirth and originate from a Brahman who is known as the Supreme deity.

‘Shiva the Destroyer’ is the latest warrior character to join Smite Battleground of Gods. It was launched on February 22, 2022, as part of the Season 9 update.

In fact, unlike other Gods, Lord Shiva is given the most accurate looks. This is contrary to Smite’s 2012 controversial depiction of Indian Goddess Kali.

Goddess Kali’s looks were opposed by Hindu groups as she was illustrated in a disgraceful, smutty costume. Other religious groups such as Catholics, Jews, and Buddhists also came forward in support

As a matter of fact, the President of the Universal Society of Hinduism, Rajan Zed, urged Hi-Rez gaming company to reconsider their portrayal of these gods, especially Kali.
The official press statement of Rajan Zed says

"Video game makers should be more sensitive while handling faith-related subjects and no faith, larger or smaller, should be trampled. As these games left a lasting impact on the minds of highly impressionable children, teens, and other young people; such inappropriate depictions would create more misunderstandings about Hinduism, which was already a highly misunderstood religion in the West.”

Initially, Hi-Rez Studio did not pay heed to the opposition by any religious group. They neglected it by saying these groups are overexaggerating.
But later on, as the controversy started rising Hi-Rez removed the offensive image of Kali.
But soon they re-incorporated the Goddess Kali character but this time changed the image and renewed the costume.

In 2022, Hi-Rez ensured to correctly create Hindu God Lord Shiva without hurting any sentiments. As they don’t want to get into another series of controversy with Hindu God. They had also released a Lord Ganesha game based on the lost tooth of Lord Ganehsa in 2017. That time it was also well accepted by critics. So now, Hi Retz, make sure that Hindu Gods are depicted as per the Hindu culture.

I read somewhere that they even consult an expert before introducing any God. Besides, India's gaming sector has increased multifold over years. They definitely don’t want to upset such a dominant market.

How appropriate is Hindu God Depiction in the Game?

Now in the game, although Goddess Kali is depicted as an unstoppable force of destruction. She is an Assassin Hindu God with all deadly weapons to make opponents bleed.

But will the Indian players ever read about her galore described as per Devi-Mahatmya in the Markandeya-Purana?

Where Ma Ambika became fiercely angry and turned dark into Goddess Kali. Slaughtered the army of demons with her sword and noose. Severed the heads of Chanda and Munda monsters. Drank the blood of Rakhtbeej asura or evil.
It was not about massacring demons, but finishing the wrongful notion of the demons for Ma Ambika. It is an illustration of huge inconceivable fear and death, for those who contemplate women in an inappropriate manner.

In the game, Shiva has been portrayed as the Hindu God who oscillates between bliss and destruction.

But will they ever know about Lord Shiva’s sacrifice during Samudra Manthan?

The intellect and wisdom of Ganesha and how he circled around his parents, as they signify the world to him.

Our Vedas and Puranas have so many auspicious texts laid out for our guidance and morals.

As per the shloka in Yajurveda

God or Supreme power is formless and doesn't have any specific form. It is beyond the human mind and senses, beyond intelligence, beyond imagination.

In fact, Vedas depict Brahman or Universal Spirit soul as the “Parmataman” who is Omnipotent, omniscient, and omnipresent.

In a simpler way he or she is described as an infinite Being, infinite Consciousness, and infinite Bliss.

According to Atharva Veda, Brahman was considered a singular base from which everything arises. It can take many forms or manifestations of the thousands of Gods.  Brahma, Vishnu, Shiva, Durga, Lakshmi, Saraswati, Ganesh or any other form are of Brahman only.

Culmination of traditional and modern way of living

Are we willing to explore them in our Vedas and inculcate the belief accurately in our children? Were our parents successful in imparting this knowledge?

No, because we are caught up to catch others in the materialistic race.

So, is it right to force the gaming organization to pull out these characters? But then how will the Hindu Gods in the Pantheon of deities reach out to the world?

Probably India needs to gear up to explore the expanding gaming sector and connect our Vedic culture with the tech-savvy generation.

Two decades ago, there were a plethora of TV serials on our Epics. Maybe it’s time to take it to the next platform and correct the mistake committed previously of not propagating our Gods, goddesses, and beliefs.

In fact, the Indian gaming sector is huge. We must launch our own game based on the true depiction and sagas as transcribed in our Puranas and Vedas.