HANUMAN CHALISA and its effects 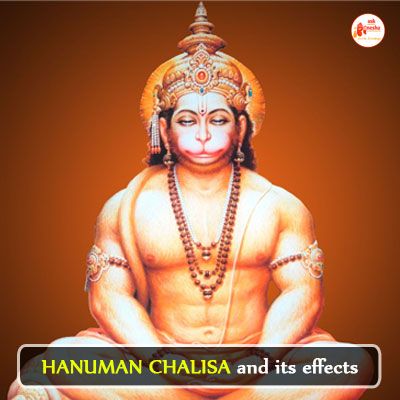 Highlight “Whoever chants Hanuman Chalisa with full devotion will be blessed by Lord Hanuman’s divine grace and the strength to fight with the most severe problems and issues like bad health, low self esteem, poor concentration, low intellectual power, feeling of timidity, negative influence of people, etc.”

Lord Hanuman is the most revered God in the hindu religion. Lord Hanuman, son of God Pawan, is often addressed by the name of Mahaveer, Bajrangbali, pawanputra, Vayuputra, Anjaneyputra, Chiranjeevi (immortal), and many other names. In the hindu mythology, it is stated that whenever someone recites ‘Sriram Jai Ram Jai Jai Ram’, Lord Hanuman comes to his rescue. The history of Hanumanji is thoroughly written in the sacred purana known as Ramayan. Lord Hanuman was a fervent devotee of Lord Rama and helped him to save Goddess Sita from the captivity of powerful Ravan along with his monkey sena.

A huge crowd of people come to visit Hanuman temples on Tuesdays and Saturdays. Lord Hanuman embodies virility and strength of mind and body. Many people wear Hanuman locket as it believed to ward off any sort of evil force disrupting the essayer’s life.

There is a whole story behind the inception of Hanuman chalisa. According to the legends, Tulsi Das went to meet the then Emperor Aurangzeb in Delhi after having the vision of Lord Rama in Gokula (birth place of Lord Krishna). Aurangzeb laughed at him and challenged him to show the same to him. Tulsi Das denied it by saying that no one can attain the vision of Lord Rama without complete devotion and pure heart. Enraged by his comments, Aurangzeb made Tulsi his captive. It is believed that Tulsi Das wrote the beautiful verses of Hanuman Chalisa in his captivity. Lord Hanuman is believed to come to Tulsi’s rescue as huge number of monkeys created menace in Delhi at that very period due to which the Emperor realised his mistake and released Tulsi Das. After Tulsi’s release, the menace completely vanished.

Hanuman chalisa can be recited in morning and evening with proper hygiene. One can sit down after taking bath and recite Hanuman Chalisa. It usually takes 10 minutes to recite the verse. Many hindu devotees know the hanuman chalisa by heart. Tulsi das said that whoever chants Hanuman Chalisa with full devotion will be blessed by Lord Hanuman’s divine grace and the strength to fight with the most severe problems and issues like bad health, low self esteem, poor concentration, low intellectual power, feeling of timidity, negative influence of people, etc. Lord Hanuman’s intervention is invoked by the chanting of Hanuman Chalisa in the grave problems including warding off evil spirits. ‘Bhoot prêt nikat nahi aave, Mahaveer jab naam sunave’, this is one of the lines of Hanuman chalisa that means even ghosts and evil spirit get annihilated when the Lord Hanuman’s name is recited.

HANUMAN CHALISA and its effects