Adhik Maas is also called the Mall Maas which means inauspicious month and during this month no festivals are celebrated. In Lunar Calendar, every month is assigned to one deity.  When sages calculated this extra month, no deity was ready to assign this month to his or her name. Lord Vishnu was approached and he readily agreed to have this extra month assigned to his name, thus it is called Purshottam Maas too.

Although this month is considered inauspicious and no new or auspicious deeds are done in this month, yet people perform a lot of religious activities during this month to please Lord Vishnu.

People are supposed to detoxify all their toxic deeds during this month by devoting this month to self-appraisal, self-cleansing, self-evaluation, retrospection and cleaning the soul of all the sins. During Mal Maas, one should do charity, help the needy and feed animals to sanctify one's sins. People should fast and worship Lord Vishnu.

People perform Homas and yajna. Apart from this Swadhyaya or self-study of various religious scriptures is done. You should especially read Shri Vishnu Puran or ShrimadBhagwatPuran during this month. There is a lot of spirituality during this month with all these religious acts being performed thus leading to purity and transformation in the lives of people for betterment.

The Science behind Ahik Maas

Nothing happens in Hindu religion without a scientific reason. Adhi Maas also has a science behind it. As we have already told that it occurs to align Solar and Lunar Calendars, let’s learn how!

The difference between an Adhik Maas and a regular Lunar month is that the Adhikmaas does not have a Sankranti, which depicts the transit of the Sun in another Zodiac Sign. So during Adhik Maas the Sun does not change its Rashi or move from one zodiac sign to another and it does not have any Sankranti.

Always make the best use of this rare Adhik Maas 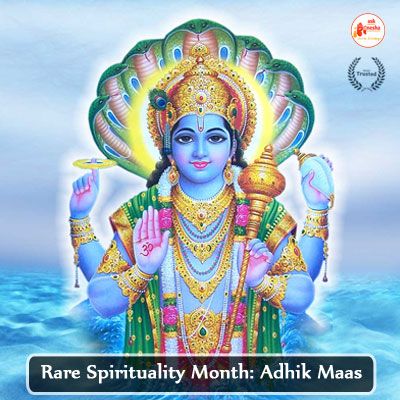