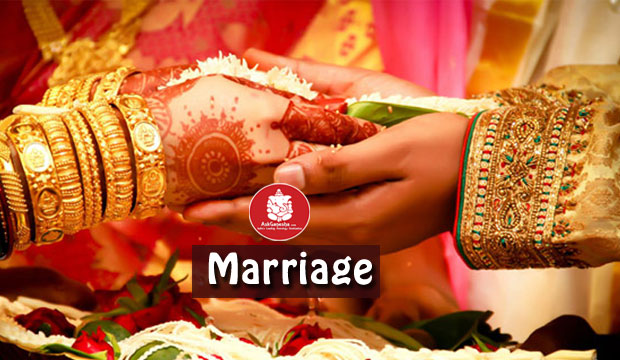 Here, we are talking about the problems that are being encountered and causing delay of marriage. Everyone wishes to be married young or to be married at the right time. Due to delay in marriage, young people have to face many problems. If there is any flaw in the horoscope of any young man and daughter, then there is a possibility of delay in marriage or problems arising after marriage. In astrology, there are simple solutions for early marriage . All astrological remedies like fasting, mantra, and religious remedies can be done to overcome delay in marriage.

The reasons behind late or delay in marriages :

Often, there is such yoga in the horoscope that creates the problem or trouble in getting married, despite of having done lots and lots of yagnas and remedies. The problem are such that they are deprived of the happiness of marriage, hence for example like the manner in which a physician is able to identify his patient before correcting any patient It is important to know the reason for the delay in marriage or the reason for not getting married. Let us know from the astrological point of view why marriage are delayed before discussing the marriage arrangements.

Mangal Defect/ Mangal Dosh: It is important to check Mangal Dosha  deeply in the horoscope if it is the actual cause of delay in marriage or not. Sometimes, Mars is good for marriage and traditional astrologers just see Manglik placements and start blaming Lord Mangal for the marital issues. Even few astrologers comment that "If the person has got married in spite of Mangal dosh then there are chances for discord in the marriage, hence the marriage between two manglik's is a probable solution here, as it will reduce the effect of Mangal defects". Inspite of such myths, a good astrologer must look planet Mars in detail and check if Mars is really creating difficulty in marriage or not.

Saptamesh's strength : If the owner of the seventh house in horoscope of the person is having connection with weak houses like 6, 8, 12 etc. then its effect could create delay in marriage of the person.

If the planet Jupiter is weak : If Jupiter in the horoscope is suffering from evil planets, if it comes in the influence of the Saturn, or arrive in malefic Nakshtras, the person will have to face the problem in marriage and married life.

Venus being in debilitation sign : If the planet Venus is weak in the horoscope of horoscope, then person has to face lack of pleasure in sexual life but a good astrologer needs to check planet Venus properly if it is placed in good Nakshtras or not.

The Navamsha Horoscope: : According to astrology, this horoscope can be accurately tells quality of married life along with life partner of a person. If a person has a defect in this Navamsa horoscope then obstacles will arise in the marriage of the person.

In astrology, there is a solution to every problem of human beings. It has also been given measures for early marriage which are as follows :

The remedies for people with Manglik dosh

Read :   Tips on the Mantras and fastings for early and quick Marriages