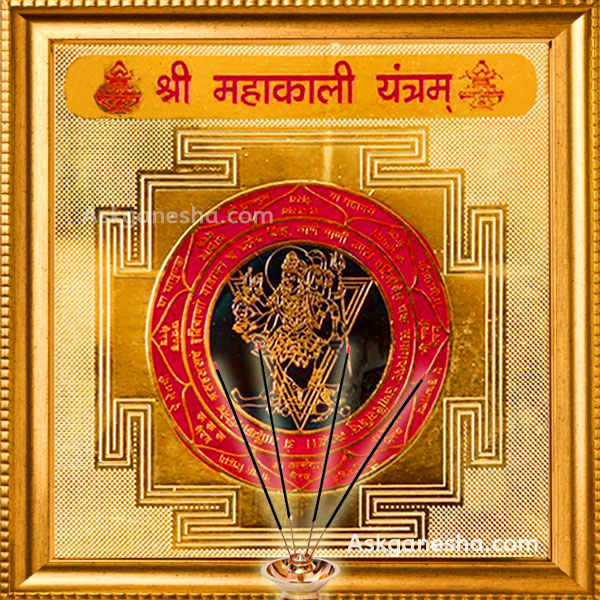 Yantra for Protection from Black Magic

Maha Kali Yantra is a very powerful Yantra, and is for the worship of Goddess Kali. This Yantra has occult powers & its worship reverses the ill-effects of black magic, also frees a person from the bad influences of spirits & ghosts.

This Yantra also eliminates the harmful effects of malefic planets, especially Saturn, which are usually responsible for misfortunes, sufferings and sorrows in life.

Kali Yantra bestows spiritual power, and results in fulfilment of desires, increase in wealth and comforts of life. This Yantra is also a remedy against chronic diseases like blood pressure, paralysis and nervous disorders. It also bestows longevity to the person who worship this Yantra regularly.

Deity of Yantra:- Goddess Kali in a fierce pose is deity of this Yantra. This Yantra is composed of a Central Point (bindu) within five inverted traingles, three circles, eight petals inside and outsides, whole Yantra enclosed in four doors.

We provide Yantras that are Energized (Pran Pratishta) by learned Purohits, by reciting the Vedic mantra of the particular Devi or Deva along with the Homa done. We provide with the Yantra the complete mantras and methodology for worshipping the Yantra.

I was not getting any luck in any business or any job. Pundits told me that my Saturn is very weak and that's why I am facing so many problems. I took advice of Askganesha's Astrologer and installed Mahakali yantra which took away my misfortune in reality and brought my luck back to myself. Today, I am successfully running my business.

My daughter started to behave very differently suddenly after we moved to a new house. My husband thought that I was overthinking but I consulted askganesha.com who told me use Mahakali Yantra which is very powerful and ward off any evil spirit. I used it and my daughter became normal over the period of time. I am extremely thankful to Askganesha.com.

Mahakali Yantra helped to get over my problems very quick in life. My career became a problem for me and I wore many gems and did many pujas but nothing helped me. I took the help of Askganesha.com and bought Mahakali yantra which was very effective and I got a great job in Bangalore.

My problem was related to a property, I was not able to sell it. May be there was some black power associated with it. I used Mahakali yantra for my problem. After some time, the property attracted many buyers and it got sold very soon. I really believe that God exists. We should never negate its presence.

After my 12th class, I was not getting admission in any college or University. My pundit told me that misfortunes are on my way as my Saturn is very weak. He suggested me to use Mahakali yantra. I started using it. I have seen its magic with my own eyes. I got reply from three universities that rejected me earlier. Thank you Goddess Mahakali.