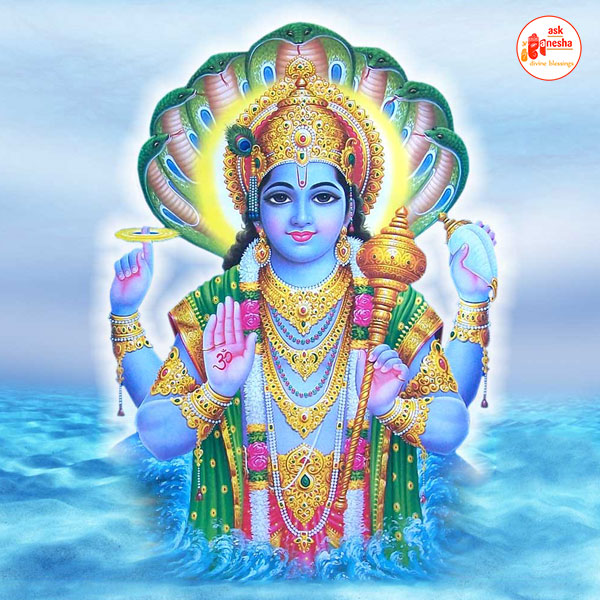 He is considered the preserver of the world. He is known as Narayan also. He has ten avatars or incarnations, of which ‘Krishna’ and ‘Ram’ are the most famous and worshipped by the Hindus.

Lord Vishnu can easily be described as the most important lord of the Hindu Trinity. Look to north India and you have Meera, the woman saint singing soulfully to her lord, Hari tum haro man ke pid. She invokes Vishnu by the name of Hari. O hari, the remover of all sorrow, come bless me, she sings. A devotee similar to her in South India called Andal sings the thirupavai again in praise of Lord Vishnu as Narayana.

Kabir, the weaver poet, surrendered to the Lord while Tulsidas wrote volumes about the same lord. Thayagaraja gave body to a whole genre of music composed in praise of this god and Jayadeva gave a form of classical dance its lyrics and mood, all centering around the very same lord. Can we forget Valmiki the father of Sanskrit poetry who wrote the Ramayana, the story of Lord Rama? Or can we forget Vyasa who describes the wisdom of Lord Krishna in whose incarnation Vishnu appears? The story of Vishnu and his many incarnations, is all pervading. In fact the word Vishnu is said to mean, all pervading, deriving from the root word vis which in Sanskrit means to enter.


Book Vishnu Puja for you

A long time ago when the world was very young, a small child lay on a banyan leaf and wondered as most of us keep doing, what his purpose in life was, "Who am I? Who created me? Why? What have I to perform?" True the baby was rather young for thoughts so profound but that was because the baby was none other than Lord Vishnu Himself. Lord Vishnu was then reminded of his all pervading powers, the foremost attribute of which was purity. His was the duty to preserve, to bring back purity into the world when it was being threatened. Brahma created while Siva, destroyed. The Puranas are very clear on one aspect: none of the three are superior to the other. To prove their equality stories abound and the versions are often confusing.