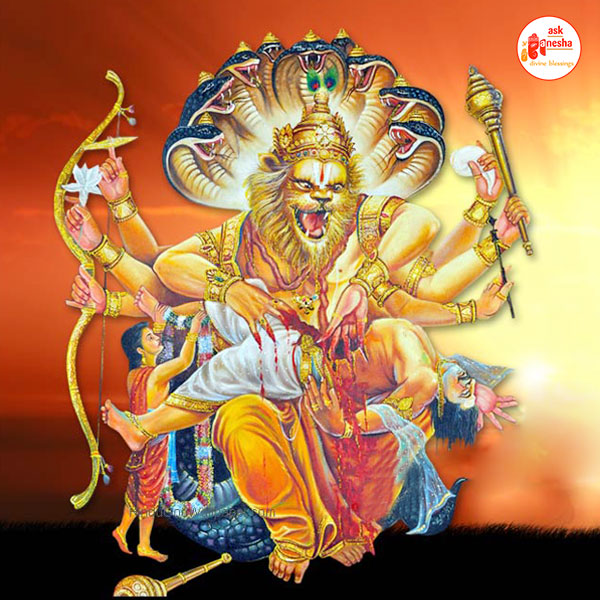 About The Story of NARASIMHA Avatar

In NARASIMHA Avatar, Lord Vishnu incarnates himself as a semi-man, semi-lion in this world. The king of demons (asuras), Hiranyakasyapa, wanted to become immortal and wanted to remain young forever. To this end, he meditated for Lord Brahma and because of his severe penance, the gods were frightened and asked Brahma to pacify the king. Brahma was impressed by his austerity and granted him a wish. HiranyaKasyapa wished that he be neither killed by a man or beast, nor in daylight or at night and neither inside or outside a building. Having obtained the wish he considered himself the supreme God and frobade all worship of gods by anyone.

But his son Prahlada, was an ardent devotee of Vishnu. This enraged Hiranyakasyapa very much. He ordered numerous ways to kill Prahlada including asking his sister Holika to sit with Prahlada in the fire. But everytime Prahlada escaped unhurt. Enraged, once he asked Prahlad to show him the Lord Vishnu. Prahlad said, "He is everywhere". Further enraged, Hiranyakasyapa knocked down a pillar, and asked if Lord was present there. Lord Vishnu then emerged as a half lion, half man from the pillar which was neither inside the house nor outside, and the time was evening, neither night nor day. He then killed Hiranyakasyapa thus saving the life of his devotee Prahlada.