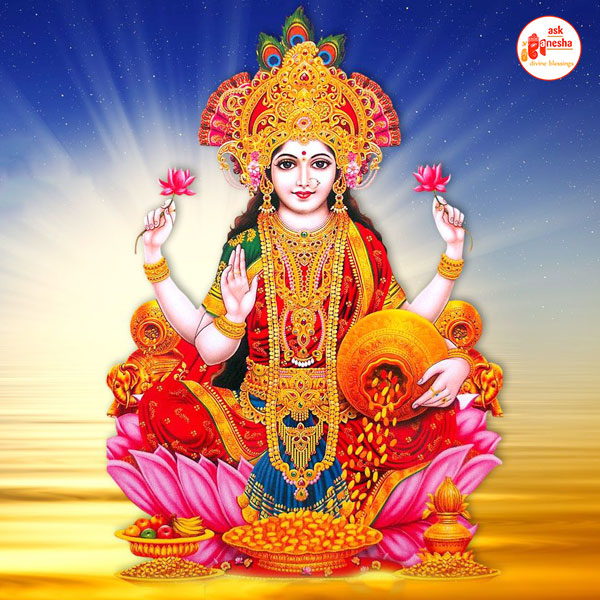 Goddess Lakshmi is the Goddess of wealth and prosperity, originated from the sea of milk after it was churned by the Gods and demons, she married Lord Vishnu. She is also the goddess of divinity and Brahmvidya or divine knowledge. She blesses you with happiness in family, friends, marriage, children, food and wealth, beauty, and health.

Goddess Lakshmi's origins are found in the great Sri Sukta ("Hymn to Sri") that was added to the Rig-Veda sometime between 1000 and 500 B.C.

Perform Lakshmi Puja for you

The birth of goddess Lakshmi is related to an ancient story. Durvasa the short-tempered sage once presented Indra, the king of the gods, with a garland of flowers which would never wilt. Indra gave this garland to his elephant, Airavata. Sage Durvasa saw the elephant trampling the divine garland and, short-tempered as he was, cursed Indra, for he had shown disrespect to the sage. The sage cursed Indra that he and all the gods would lose their power because it had made them so proud and vain. Due to the curse, the demons vanquished the gods out of the heavens.

The defeated gods then went to seek refuge to the Creator Lord Brahma who asked them to churn the ocean of milk, to obtain the nectar of immortality. The gods then went to Lord Vishnu, to seek his assistance. Lord Vishnu took the Avatar Kurma (Tortoise) and supported the Mandarachal mountain as a churning rod, while the king of the serpents, Vasuki, became the churning rope. The gods and the demons (under the leadership of the pious and wise King Mahabali) both helped each other in churning the ocean of milk.


Amongst the host of divine gifts which appeared from the ocean, goddess Lakshmi appeared and then chose Shri Vishnu as her consort, as only He had the power to control Maya (illusion). Because of this, Lakshmi is also called the daughter of the sea; since the moon also appeared from the ocean during the churning, the moon is called her brother.

Perform Lakshmi Puja for you

Lakshmi is also known to very closely associated with the Lotus. Her many names are connected to the flower, such as: