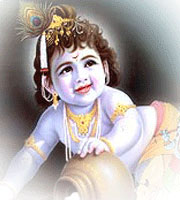 About The Story of KRISHNA Avatar

In KRISHNA Avatar, Lord Vishnu incarnates himself as KRISHNA , the central character in the epic MAHABHARATA. In the biggest epic of Indian mythology a myriad of topics are covered, including war, love, brotherhood, politics etc. It is essentially the story of two warring groups of cousin brothers, the PANDAVAs and the KAURAVAs. As a part of the Mahabahrata, during the war KRISHNA, gives a long discourse to his disciple ARJUNA, collectively termed as Bhagvad-Gita.

Perform Krishna Puja for you

Unlike Ramayan, Mahabharata deals with more down to earth issues like politics, human nature, human weaknesses, and does not attempt to idealise the characters as in Ramayan

Perform Krishna Puja for you