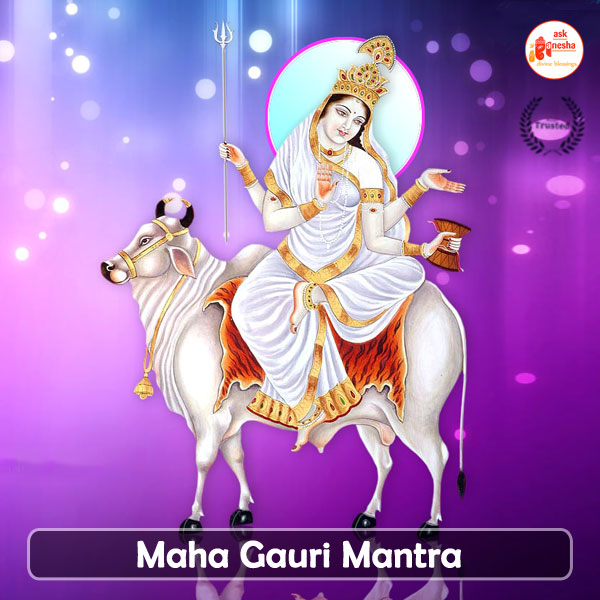 Maa Gauri is the eighth manifestation of goddess Durga and amongst the Navadurgas. Mahagauri is worshipped on the eighth day of Navratri. According to Hindu mythology, Goddess Mahagauri has the power to fulfil all the desires of her devotees. The one who worships the goddess gets relief from all the sufferings in life. Maa gauri has four arms. Her right arm is in the pose of allaying fear and right lower hand holds a trident in it. She holds a tambourine in her left upper arm and the lower one is in the form of a blessing. The name Mahagauri means extremely white. She is serene white, pure and represents purity in thoughts, minds and actions.

Legend has it, that on behest of Narad Muni. When Parvati was sitting, in penance to beget Lord Shiva into marrying her. She forfeited all the material comforts of the palace and stated to live an ordinary life. In due course she endured all the forces of nature. At the end, Lord Shiva Appeared and gave her the boon of marrying her, after which, He bathed her vigorously by the holy waters of the Ganga emanating from his matted hair. The holy and sacred waters of Ganga washed off all the dirt clinging to Parvati's person and she became white-complexioned and glorious. Thus by virtue of having acquired a white complexion, Parvati came to be known as Mahagauri (Extremely Fair).

This mantra is beneficial for those who are unable to get married, or having problems in getting married or marital problems, want to removing Mangal dosh

After spending 10 years with my fiancé I was unable to get married to him, after seeing a blogpost of AskGanesha I recited this mantra, and now iam getting married to him.

My son was unable to get married for the longest time. I took advice of my sister and started doing this jaap, after which my son got happily married.

I was unable to get married. But after chanting of this mantra now my marriage is fixed.

After seeing a FB post of AskGanesha I recited This mantra and soon my marriage got fixed Thanks to AskGanesha.

My daughter was not getting even after coming of the age, So some one told me about AskGanesha Maa Gauri Mantra, After which I got good news of my daughters wedding being fixed.