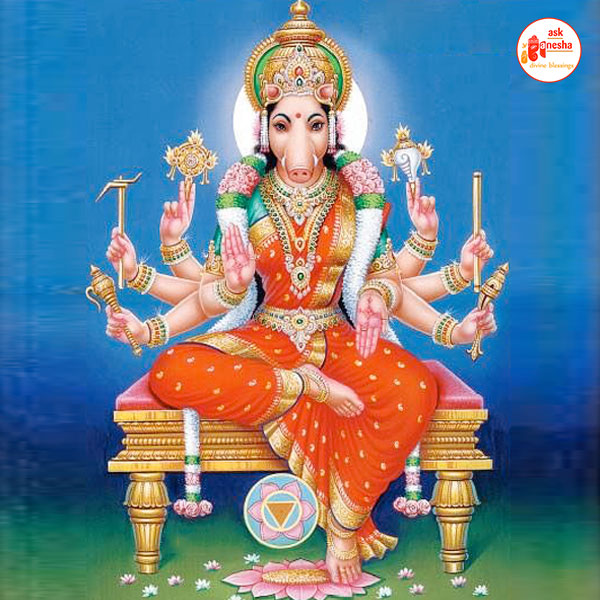 Varahiis a form of Shakti or Parvati and is considered a fierce goddess since she aided Goddess Durga in killing demons like Shumbha, Nishumbha, and Rakhtbijh.By worshipping Goddess Varahi, one is blessed with a long and healthy life, all kind of diseases can be fought easily.

Devi Varahi is another form of Goddess Shakti or Goddess Parvati. Varahi is one of the Matrikas (Mothers) or as some people call it Saptmatrikas. Saptmatrikas are a group of seven divine mothers. Saptmatrikas include Brahmi, Maheshwari, Kaumari, Vaishnavi, Varahi, Mahendri and Chamundi. Varahi represents Lord Yama's energy. She is said to have been created out of the boar form of Lord Vishnu. Varahi is worshipped at night that includes discreet tantric practices. Devi Varahi is worshipped in three groups of Hinduism, especially in Shaktism (goddess worship) and other two are Shaivism (Lord Shiva followers), Vaishnavism (followers of Lord Vishnu). Varahi is considered a fierce goddess since she aided Goddess Durga in killing Shumbha, Nishumbha and Rakhtbijh. Other Goddess of Saptmatrikas are calm and loving. Varahi is the Goddess who appeared out of the energies of Gods.

The icon of Devi Varahi depicts the Goddess with a boar face wearing crown and fancy ornaments all over her body. She wears anklets on her feet and she has a dark complexion. She has eight hands out of which two hands are pointed downwards to bless the devotees. In other six hands, she holds many weapons. She is seen seated on the lotus. It is believed that once she kills her foe, she dances on his blood. As per the legends, Goddess Durga while fighting with the demons Shumbh Nishumbh and Rakhatabijh, creates the Matrikas from herself and with their help, she slaughters all the demons. While Rakhtabijh challenges Goddess Durga to defeat him in a single combat, Goddess Durga absorbs all the matrikas in to herself and the matrikas arises from the different parts of Goddess Shakti, Varahi arises from the back. The temple of Devi Varahi are located at various place in India and in Nepal. In India, they are located at Orissa, Puri, Varanasi, Chennai, Thanjavur, Gujarat and Tamil Nadu. A Varahi temple is located in the middle of Phewa Lake, Nepal.

It is believed that Devi Varahi should be worshipped after the sunset and before the sunrise. By worshipping Goddess Varahi, one is blessed with long and healthy life, all kind of diseases can be fought easily. Also it helps in turning the events in one's favour.