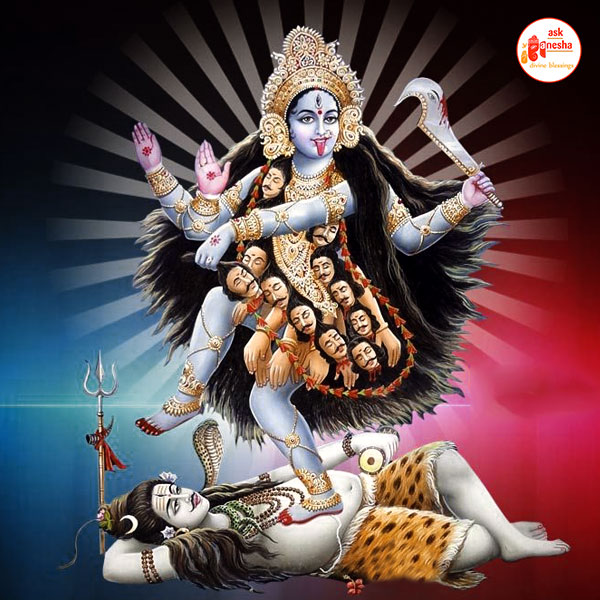 Goddess Kali is one of the nine forms of Shakti (Durga, Parvati, Lakshmi, Saraswati, Chandi, Annapurna, Amba, Kali, Tripurasundari) in Hinduism. She is considered as the fiercest of all the Goddesses. Her other names are Bhadrakali, Rudrani, Dakshinakali, Mahakali. The word 'Kali' originates from the word 'kaal' meaning 'time' in English. Goddess Kali depicts energy that is beyond time. She is portrayed in a very fierce manner. She has a black skin with a red tongue hanging out from her mouth. She wears a garland made of skulls. Her eyes depicting anger and death. She has four arms. One arm holding sword, other holding trishula, third one holding the head of demon Mahishasura and the fourth one holding a bowl in which the blood is dripping from the demon's head. She is portrayed standing on her consort Lord Shiva, who lies there calmly.

Despite her fearful depiction, she is considered as one of the kindest and the benevolent of all the Goddesses. She provides liberation and salvation to her devotees. She is often considered alike her consort Lord Shiva as both are destroyer. She is also known to be as the Goddess of death but actually she brings the death of the ego and the evil forces. She originated to kill the demons, so she should not be confused with Lord Yama (God of death). While she kills the demons, she promotes the idea of spirituality that means after death, the corporeal frame decays but what remains is the soul so everyone should let go of their stubborn ego.

Maa Kali Puja is beneficial in innumerable terms like keeping off the bad eyes of people ceasing your growth and development, delays in marriage, failure in progeny, ill health, poor concentration and decision making. Maa Kali Puja is performed by recitation of Maa Kali Mantra by a well-versed Purohit. It can be performed on someone's behalf as well.