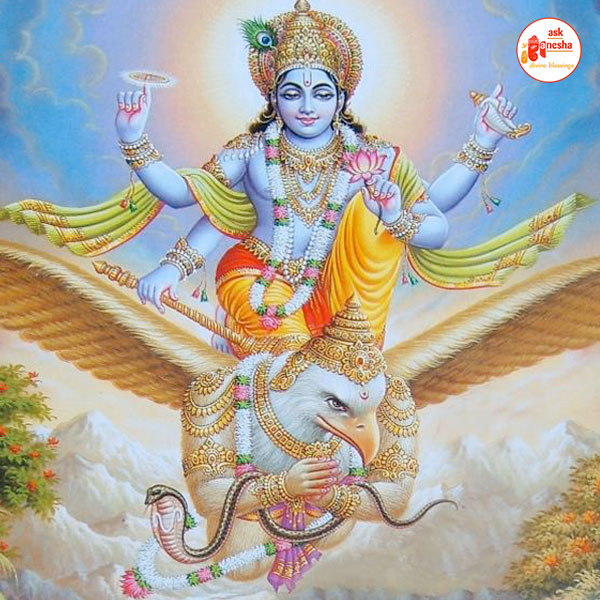 Garuda yields a protective shield against all snake related malefic conditions in one's natal chart. It is believed to cure Kal Sarpdosha.

Garuda is the Eagle God. In Indian mythology, animals and birds are given a lot of importance as Gods and demi Gods. Snakes, Cow, Tortoise, Monkey, Tiger, Elephant and peacock. Similarly Eagle is given a lot of importance in Indian mythology as well. Garuda is the vehicle or Vahana of supreme God Vishnu.Garuda is said to be the king of Birds. Eagles are considered natural enemies of Snakes. Garuda is the national symbol of Indonesia. The icon of Garuda depicts him as having the golden strong body with a white face, red wings and an eagle's beak and with a crown on his head. It is a massive bird and is shown as carrying Lord Vishnu and his consort Goddess Laxmi on his back.

The birth of the eagle God, Garuda takes us back to the epic Mahabharata. According to the epic, Sage (Rishi) Kashyapa had two wives named Kadru and Vinita. While Vinita wished for two sons, Kadru wished for thousands of sons. Kadru gave birth to thousands of snakes and Vinita gave birth to a Garuda, powerful and strong bird. Once kadru and Vinita put a bet on the colour of the tail of the horse who was obtained during the churning of ocean (Samundra Manthan). While Kadru said it is black, Vinita claimed it to be white in colour. Kadru found out that the colour of the tail is white and hence she cheated by asking her sons to wrap around the tail of the horse and as a result it appeared black to Vinita because of which she was declared a loser. According to the bet, Vinita and Garuda became a slave to Kadru and her sons.


Later Garuda secured Amrit from heaven and freed himself and his mother from the servitude of Kadru and her sons. But the cheating and insult made the snakes, a forever enemy of Garuda. Garuda's wife is Unnati (Progress). They had two sons- Sampati and Jatayu, both of whom played important roles in Ramayana. Garuda is mentioned in Bhagwad Gita where Lord Krishna says, 'Of birds, I am the son of Vinita' which means that he is an incarnation of Garuda.

Worshipping Garuda yields a protective shield against all snake related malefic conditions in one's natal chart. It is believed to cure kal sarp dosha in many people's horoscope. This pooja can be performed with the help of a purohit.