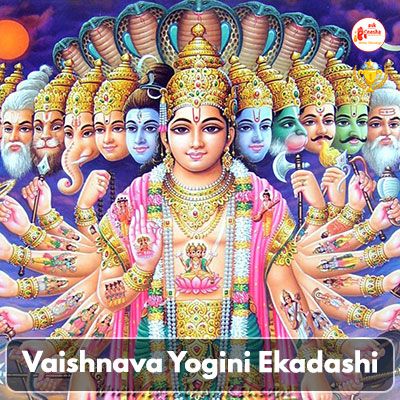 Share:
Vaishnava Yogini Ekadashi falls on the Krishna Paksha during the long stretch of Ashadha. According to Hindu mythology, Yogini Ekadashi is the most important Ekadashi if you wish to get rid of any kind of ailments. By taking vrat on this day, devotees are honored with wellbeing and prosperity. Yogini Ekadashi is also known to recover the individual from sins and bad deeds of the past and also help in achieving salvation.

The legend behind Vaishnava Yogini Ekadashi

Legends portray the tale of a gardener, and his spouse, Swarupavati. They worked for Kuvera, King of Alakapuri, who was a devout lover of Lord Shiva. Every day, the nursery worker would gather blossoms from Manasarovar Lake and give them to the master for the Shiva Puja. The gardener was in love with his wife and during one such time, he remained back with spouse despite his obligations towards his work. He couldn't bring flowers to the ruler. The king found that Gardener was busy with his spouse as opposed to satisfying his obligation of gathering flowers for him. The gardener was brought to the court. He asked for forgiveness. The lord cursed him with experiencing infection and be isolated from his spouse. The gardener was thrown out of the royal palace, and he got infected with leprosy. He wandered through the forest for quite a long time. One day he reached the ashram of Sage Markandeya. He foretold his story to the sage. The sage advised him to take fast on Yogini Ekadashi which will free him from the negative elements and the curse. The gardener took the vrat and came back to his normal self. In this way, he was able to rejoin with his spouse and lived his life peacefully.

The puja and vrat of Yogini Ekadashi begin from the tenth day and continues till the 12th day. The devotees worshipLord Vishnufor prosperity with a positive mind. The devotees also offer sweets, incense stick, diyas(light), water and rhymes to the lord. Tulsi leaves must be kept on the earlier day as one shouldn't pluck it on Ekadashi. All the family members participate in the puja regardless of whether they are fasting or not. The bhajans and Aarti's are sung to appease the Lord. After the end of the puja, Prasad is distributed among all devotees. Prasad should comprise of either fruits or sweets. On the following day, devotees must offer bhog to the Lord, and lit a diya, alongside distributing prasadam to finish his/her vrat. We at Askganesha wishes you and your family an auspicious Vaishnava Yogini Ekadashi.
Share: