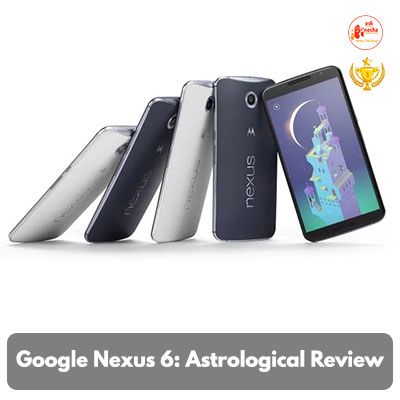 Nexus 6 which is a flagship of Google is all set to go for pre orders in India on Tuesday, November 18, 2014. As per the Moon chart of the day it is concluded that the Nexus 6 is going to be liked by the people. The placement of Mercury in the tenth house indicates that the performance of the phone will be good and as per the expectations of the user. The afflicted planet Venus is indicating some bugs in the starting phase and it is also possible that there will be some hindrances in the update patch of the android Kit Kat 4.0 to Lollypop 5.0 in some phones such as slowing the phone, repeatedly crash, reinstallation of some of the apps etc. The right time of launch is unknown but it will be good if it is launched in between the 18:12 to 21:40 IST. The right mahurat had the strength to reduce the malefic effects of kal sarpa dosha in the moon chart and bring good positive feedback of the users of Nexus 6. As per the Moon chart even after most of the favorable things the sale of Nexus 6.0 will fall short of expectation. The planet Venus which is also natural significator of electronics is showing that the marketing of the phone will only be the main focus to increase its sales. We at askganesha.com wish and congratulate google for introducing nexus 6 with android version lollypop 5.0 to gain a new lease of life with new features to its users.

The landing page of flipkart for Google Nexus 6 is mentioning 1 day to go for Nexus 6. NDTV Gadgets has also said that the Google Nexus 6 will go for pre order from Tuesday onwards.

Earlier this month Google has already confirmed the pricing of Nexus 6 in India by listing it on Google Play Store. Rs. 44,000 is the price of Nexus 6 32 GB variant in India and for the 64 GB one shall need to pay Rs. 49,000. The prices are somehow matching with the prices NDTV Gadgets quoted earlier.

In fact the pricing of Google Nexus 6 32GB and 64 GB Variant is same as mentioned Rs. 44,000 and 49,000 respectively on Flipkart. The Flipkart listed the 32GB on their website without the price and has been teasing its customers since a week.

Motorola is the manufacturer of the Google Nexus 6, has 5.96 inch QHD (1440X2560 pixels) display at 493ppi. This phone has 2.7GHz quad-core Qualcomm Snapdragon 805 processor alongside 3 GB of RAM. The Google Nexus 6 has 13 mega pixel rear camera and 2 mega pixel front camera to take the best snap shots.

It has got the Android 5.0 Lollipop which is the most recent one which has new designs and new exiting features. To add to the bulk of Google Nexus 6 it has 3220mAH battery, and the dimensions of the phone are weight 184 grams and measures 82.98x159.26x10.06mm.

The Google Nexus 6 will be coming to 28 countries including India, Europe, Asia- Pacific and North America.

Google with this new Avatar has made its name among the high segment phones ike it has always been doing. The battery life and other specifications shall be revealed soon.