Bajrangi Bhaijaan: A Review by AskGanesha 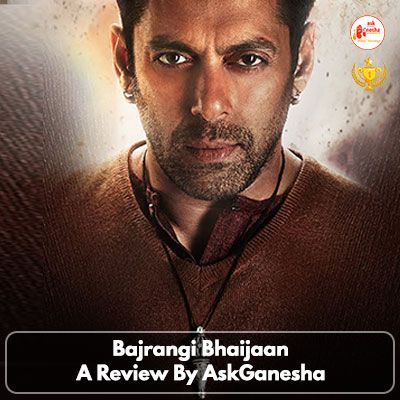 Share:
The film revolves around a young speech-impaired girl from Pakistan who finds herself lost in India with no way to go back over the border to her home. An Indian man (Salman Khan) undertakes the task to get her back to her home and reunite her with her family.
Salman Khan's enjoyable shock with his un-hero like performance, Kareena doesn't have much to do and Nawazuddin, who's reliable to make his characters most realistic is completely cast. But it is the little Harshaali Malhotra who will steal your heart with her innocent face and obviously natural talent.
Bajrangi Bhaijaan, as Khan told sensationalist! earlier, is about "love and love and only love". You will receivea sufficient amount of romance to fatherly and brotherly love and the love for one's country. It is an out-and-out Khan entertainer, such as Dabangg, Ready, Ek Tha Tiger, only this time it has a story which takes the audience at a sound swiftness through a two and a half hours journey across two countries. And interestingly, there is no item number in the film.
Bajrangi Bhaijaan is not a bad film. It's not aggressive like Dabangg, preachy like Jai Ho or frustratinglike Kick. It's a cute film that talks about Indo-Pak issue. Most of all Bajrangi Bhaijaan makes you feel proud of the fact that we come from a secular country like India where a Muslim director takes the biggest Muslim superstar, launch him Bajrangi and makes him chant Jai Shri Raam in a film that releases on EID! Watch it. It's a fun family watch. Salman has said on a public platform: If you are looking for negativity and hatred don't come for this film. (If) you want to watch love and unity, come for this film. That is our message to all fans who want to come and watch Bajrangi Bhaijaan.
Share: