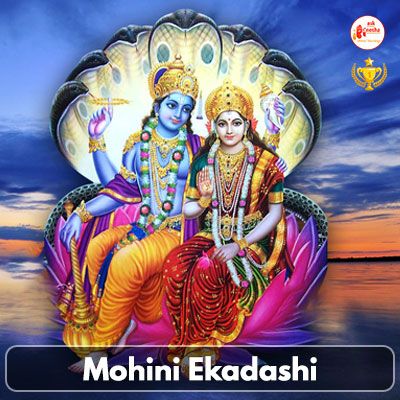 Mohini was an incarnation of Lord Vishnu and his only female incarnation. She was said to be a beautiful enchantress who destroyed people by entrapping them in her charm. Mohini Ekadashi is therefore a day dedicated to Lord Vishnu, to show gratitude for his role as the protector of the world. Mohini Ekadashi occurs in the waxing phase of the moon in the Hindu calendar month of Vaisakha (April/May). Mohini has been mentioned in many texts, such as the Indian epic Mahabharata.

Mohini Ekadashi is a very pure and auspicious day and has a specific way of observance which was told by Lord Krishna, he said that just by praying and chanting to any holy deity you can attain their blessings but even so there are ways which ordinary people should follow. Lord Krishna said that anyone who worships Lord Vishnu on this day gets purified of all sins and any illusions in his life disappear. He also said that on Mohini Ekadashi you can get virtues equal to what you will get by praying or sacrificing countless times. It said that people should do charity on this day as devotion to Lord Vishnu and be faithful in life.