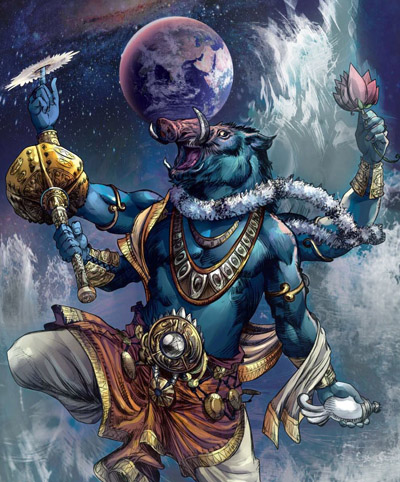 The Story of Varaha Avatar

In VARAHA Avatar, Lord Vishnu incarnates himself as a boar in this world.

A demon Hiranyaksha, had prayed for Lord Brahma and got awarded a boon that no beast nor man nor god could kill him. But somehow from the list of beasts the name of boar was missing. This proved to be his lacunae. He then started a campaign of plunder across the worlds. He pushed the world to the Pataal loka, or the under of the sea. He stole the Vedas, the holy scriptures from the Lord Brahma, while he was asleep and performed huge atrocities. To retrieve the Vedas and to save the world the Lord Vishnu assumed the role of a boar and brought out the earth from the under of the ocean, using its two tusks. It then killed Hiranyaksha and retrieved the Vedas from the asura and brought it back to the safe custody of the Lord Brahma.