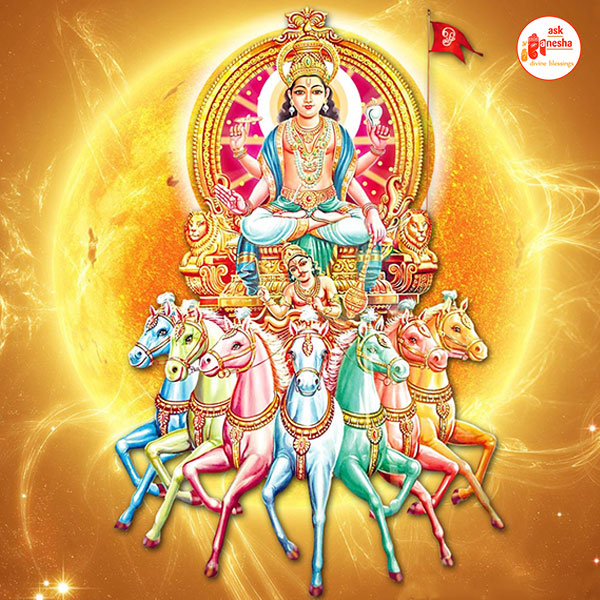 In ancient India during Vedic age and even afterwards SURYA has played a very significant role in Hindu mythology and amongst Hindu gods.

CHHANDOGYA Upanishad says that at the time of creation the world's egg divided itself into two parts, the one of silver and the other of gold. The silver part became the earth, the golden part the sky .The outer cover of the egg became the mountains; the inner cover the clouds and snow; the inside veins became the rivers and the liquid in the egg became the ocean. When the sun appeared there was a great cry from which all the beings and all their pleasures were born. Hence at his rising and setting, cries and songs are heard; all beings and desires rise toward it. Those who worship the sun as the Absolute ever hear beautiful sounds and are filled with joy.


The other name of SURYA is SAVITRI, which means brilliance. In the later ages, like other many Vedic gods, this god became more or less a mythical figure superseded by Vishnu, who came to be regarded by Hindus as the supreme manifestation of the self-Existent the Supreme God. Still the most celebrated mantra (hymn), known as GAYATRI Mantra, is the incantation addressed to SURYA. Also many of the forms of meditation, prayers and rituals used in the daily ceremonies of Hindu Brahmins are addressed to this god. Daily in the morning one can see hundreds of Hindus offering water to the rising sun, accompanied with incantations. Women can be seen frequently taking a pledge that in case SURYA bestows them with a son, they would be regularly performing ceremony to worship this god.

A legend states that about three hundred years ago a learned Hindu, who was suffering from leprosy, prayed to SURYA for cure. He was inspired to write eight verses in Sanskrit, known as SURYASHTAK, to please the god, and by the time he had finished the last verse he was restored to health. Worship of the god SURYA is performed standing in the sun with clasped hands and closed eyes. The origin of this method of obtaining relief from sickness is ascribed to SHAMBU, the son of Krishna, who was directed in a dream to repeat twice a day the twenty-one names of SURYA standing in this manner.

SURYA has two wives, SANJANA and CHHAYA. The first one is the daughter of VISHWAKARMA. After her marriage she found that she could not bear the power of this god's rays. She, therefore, made an image of her own, imparted life to it and left it with SURYA. Later on she was turned into a mare and was adopted by SURYA again.

The abode of this god is called as SURYALOKA. A powerful race of Hindu kings has always taken pride in calling itself as the direct descendant of Surya. In this dynasty of SURYAVANSHIS (the descendants of SURYA) the first King had been IKSHWAKOO while god RAMA was the sixty-sixth king in this lineage. Even till medieval ages and thereafter so many RAJPUT kings connected their family with Surya.

Surya has several sons. The lawgiver,MANU, the lord of death, YAMA and the river, YAMUNA were born of SANJANA. According to Mahabharata, the great warrior KARNA was this god's illegitimate son by KUNTI, the mother of PANDAVAS. Surya is also the father of the monkey chief, who was the ally of Lord Rama.

The well-known horses of SURYA are mentioned in Rig Veda, which says, "May SURYA with its seven horses arrive";. The sun sits on a lotus in his chariot of seven golden mares. Sometimes the chariot has only one horse with seven heads surrounded with rays. Surya's charioteer is ARUNA (the red one), who is the wise elder brother of GARUDAA, the vehicle of VISHNU, and is also the deity of dawn. He stands on the chariot in front of the Sun, and his strong and vast body shelters the world from Surya's fury.

Though small images or visual representations of this god can be seen in bit temples of other gods, SURYA has only one full-fledged temple dedicated to it. It isthe famous temple of Sun god at KONARK in Orissa. The structural peculiarity of this shrine is that it is built mainly of blocks of laterite without the use of mortar. The blocks are all held together by a system of poise and balance - a masterpiece of the science of architecture. In this temple the weight of one stone acts against the pressure of another, much of the stability being a matter of balance and equilibrium. The temple was built in the thirteenth century A.D. but seems to have been later abandoned for some unknown reasons.