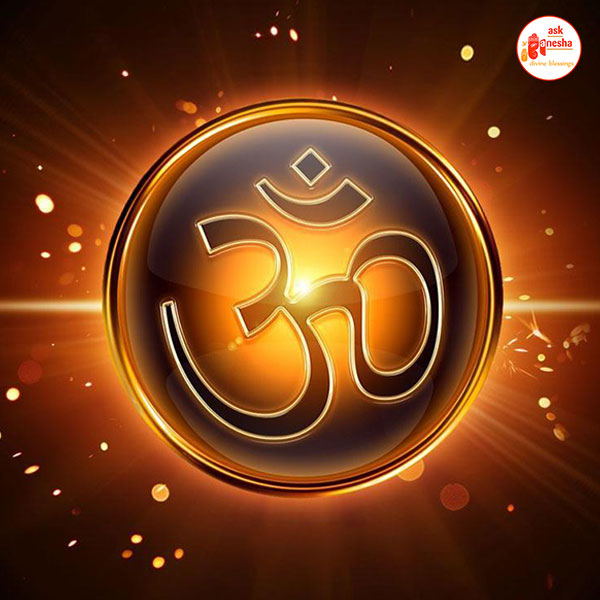 OM or AUM is the symbol of essence of Hinduism. It means oneness with the Supreme, the merging of the physical being with the spiritual. The most sacred syllable, the first sound of the Almighty - the sound from which emerges each and every other sound, whether of music or of language.

In the Upanishads this sacred syllable appears as a mystic sound, regarded by scriptures as the very basis of every other sacred mantra (hymn). It is the sound not only of origination but also of dissolution. The past, present and future are all included in this one sound and even all that transcends this configuration of time is also implied in OM.

Shiva's drum produced this sound and through it came the notes of the octave, (i.e.) SA, RI, GA, MA, PA, DHA, NI. Thus by this sound Shiva creates and recreates the universe. OM is also the sound form of Atman.

The Upanishads state that everything, existent and non- existent, can be grasped by uttering the sacred syllable of OM. The psychotherapeutic efficacy of OM is deemed limitless and its utterance redeems all errors in the performance of a sacrifice. Meditation on OM satisfies every need and ultimately leads to liberation. Nearly all the prayers and recitals of sacred passages are prefixed by the utterance of OM. Its equivalent is OMKAR, venerated in the same manner and is thought to be the representation of God Himself.

Musically, it is also held that the term OM or AUM is made up by three base notes ' A ' 'U' 'M' or the basic 'SA' 'PA' of the fundamental scale and again Sa (the base note) of the immediately higher scale. When one pronounces these notes in continuity, all the basic notes from Sa to Ni also sound. Similarly when one pronounces AUM correctly, all the basic sounds also echo. It is believed to be the traditional way of clearing all the impediments in the vocal chord to make one chant the hymns correctly. Their unison makes one not only sound sonorous but also acts as the necessary preparation to chant a Mantra (Incantation) correctly. It is for this reason that all the Vedic Mantras has 'OM' or' AUM' as the first term.