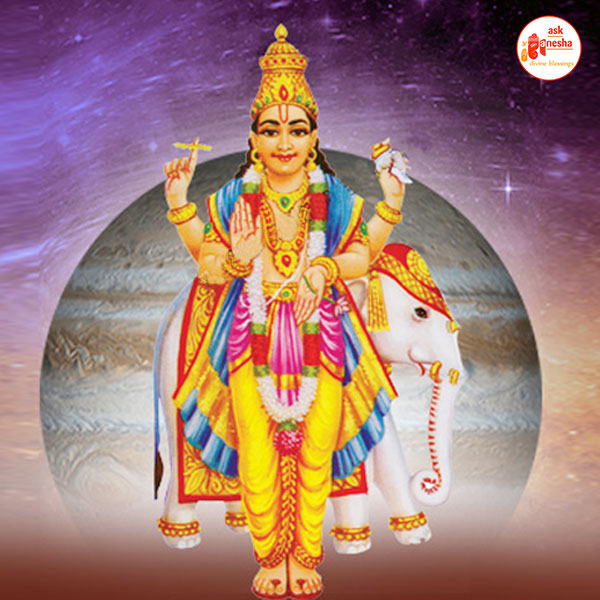 The planet Jupiter in Vedic astrology is known as GURU, BRIHASPATI, and DEVAGURA. In Sanskrit these names mean, "teacher, lord of light, and teacher to the gods."

Jupiter is a 1st rate benefice planet, generally considered to be the most auspicious of the planets. He rules over the two sidereal signs of Sagittarius and Pisces. He is exalted in the sign of Cancer and fallen in the opposite sign of Capricorn. Where the Sun is known as Atman, or the soul, Jupiter is known as JIVA, the consciousness of the soul representing the individuality of self.


Jupiter is a karaka or indicator of fortune, wealth, fame, luck, devotion and faith, spirituality, charity, morality, meditation, mantra, children, magistrates, ministers, lawyers and leaders in government and religion. Jupiter represents sacred scripture, wisdom, benevolence and philosophy. Jupiter's most favored position is in the first. He does well both in the Kendra's and Angles, and the auspicious Trikonal Houses. His nature is KAPHA, or watery. His gemstone is Yellow Sapphire or Yellow Topaz and his metal is Gold. Jupiter's direction is Northeast and his day is Thursday. As a benefice planet he reaches full maturity the earliest of the 9 grahas at age 16.

Worship of BRIHASPATI or GURU (JUPITER) Devata results in a cure from ailments affecting the stomach and helps one to ward off his/her sins, helps him/her in gaining strength, valor, longevity etc. He grants the boon of father-hood to the childless, good education (Vidya). He is revered as the Guru of Devas, protector of the world and is considered SRESHTA (matchless) among the wise. Kind-hearted he is considered the Loka Guru and dispenser of justice and can be known only by a proper study of the Vedas. Thursdays are considered to be the best day for the worship of Jupiter. The legend that depict the influence of the worship of BRIHASPATI goes as follows, and is narrated whenever a worship or offering is made to the deity.

There was a certain king who had seven sons and their wives. Two Brahmins used to come there to beg alms but the wives returned them, empty handed. Therefore Jupiter deity was displeased with them, which affected adversely the prosperity and wealth of the king. When there was devastation in the kingdom and the king neared poverty, the youngest wife sought excuse from the Brahmins and started giving them alms but still the elder six denied alms to the Brahmins. The youngest wife asked the Brahmins the remedy for getting over the bad days. The Brahmins advised to keep a fast for Brihaspati to feed Brahmins. If anyone' s husband has gone to a foreign country, then that woman should make two human figures behind the door; that would result in early safe return of the husband. If the family is stricken with poverty then those figures should be made on a box.

The king's seven sons had already gone on a foreign tour. The youngest wife observed the ritual as advised. Her husband had gone to a place, the king of which died. The king had no son. To find a suitable successor, a garland was hung on the horn of a female elephant so that whosoever is garlanded by it, he shall be the king as per the tradition of that kingdom. The elephant went all around and ultimately put the garland round youngest son's neck. He became the king. He searched for his brothers, but in vain for the sake of public welfare, the new king decided to construct a tank. Thousands of laborers were engaged, among whom his brothers also came. He called all of them took them to his palace and all started living peacefully. The worship and alms by the youngest wife brought prosperity back to the family. Then all other wives also started Brihaspati fast and worship. No one was ever refused alms by them, anymore.