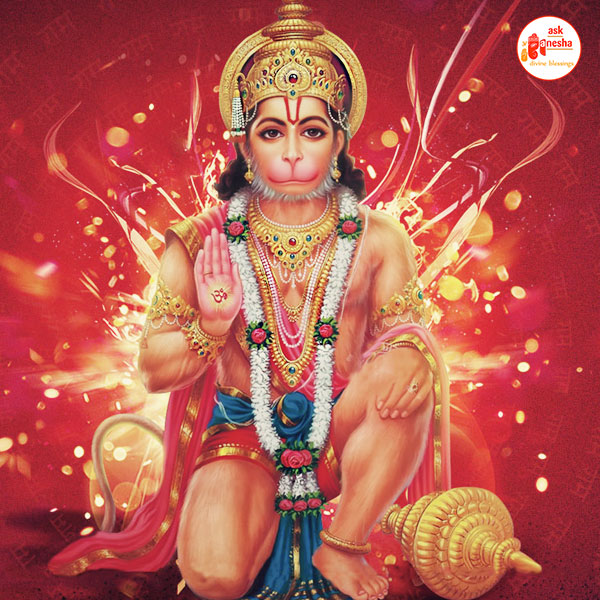 Is worshipped as a partial incarnation of Lord Rudra (Shiva), and a keen devotee of Lord Ram. Worshiping him brings strength and courage

Hanuman, the well-known monkey god, can be seen in temples throughout the country. In some temples his image is set up alone standing with a mace in the right hand or sitting in a devotional posture before the images of Rama and Sita. He is considered to be the god of power and strength, who remained a celibate through his whole life. He is worshipped as being the greatest devotee of Rama who loves Hanuman the most.

Hanuman's other names are HANUMAT and PAVAN-SUTA. He is the son of VAYU, the lord of winds and ARIJANA, the female. Along with Rama, Hanuman is invariably worshipped and he is the most favored deity of wrestlers and grapplers. Tuesday is the sacred day on which lakhs of Hindus worship Hanuman and pray to him for strength and prosperity.

Hanuman's deeds of bravery and feats of valor are related in great detail in the Ramayana and also scantily in a few other religious books like Mahabharata and Agni Purana. This god is described as having a short thick neck, a round red face, sharp white fangs, a mane like Ashoka flowers, a tail like Indra' s banner and ability to expand until he could be as large as a mountain or to contract until he could be as small as a fly.


Perform Hanuman Puja for you

So many interesting myths surround this god. Hanuman, when quite young, saw the rising sun; he thought it to be a ripe fruit, jumped up to it and seizing it put the sun into his mouth. All the gods and goddesses, for fear that if swallowed the sun the whole world would perish, prayed to him to spit out the sun. Hanuman agreed and the world was saved from complete darkness. When only ten years old, Hanuman could lift the hills sixteen or twenty miles in circumference and throw these like stones. Once swallowed by a monster, he expanded his body and the monster had to vomit this god out.

On another occasion when one monster put Hanuman in his mouth, this god transformed himself into a very small figure and emerged out of this monster's big ear. This story runs thus: When Hanuman was on his flight to RAVANA'S Lanka on his job assigned by Ram, a female-demon named SURASA saw that this monkey was going to harm her near relative, Ravana. So in an effort to save her cousin she swallowed Hanuman bodily. To avoid this Hanuman continued expanding his body, while she continued stretching her mouth till it was a hundred leagues wide. Suddenly Hanuman shrank his body and within seconds he became thumb-sized. Taking the female demon by surprise he darted forward and came out through her right ear.

The scriptures state that 'his form is as vast as a mountain' and as tall as a gigantic tower. His complexion is yellow and glowing like molten gold. His face is as red as the brightest ruby while his enormous tail spreads out to an interminable length. He stands on a lofty rock and roars like thunder. He leaps into the air and flies among the clouds with a rushing noise, while the ocean waves are roaring and splashing below. Ramayana further says, The chief of monkeys is a perfect being. No one can equal him in learning of SHASTRAS and in comprehending the meaning and sense of scriptures. In all sciences and in the rules of austerity, he rivals the preceptor of the gods. Hanuman is the ninth author of grammar

Hanuman became the greatest and the most faithful helper of Rama in his campaign against Ravana. When sent as Rama's envoy Hanuman was given a ring to convince Sita that he was truly her husband's messenger. With a formidable leap he crossed the seas and reached Lanka. He succeeded in meeting Sita and brought her news back to Rama.

Ravana's guards, while he was in Lanka, had succeeded in catching Hanuman, who was then brought to the demon-king's court. At Ravana's command his tail was set on fire and with his burning tail Hanuman created a great havoc in Lanka. When Rama's younger brother was lying unconscious in the battlefield and the herb that could cure him was not available, he came forward to bring that herb from Himalayas. In the hurry when Hanuman could not trace that magical herb he lifted the complete hill and flew to bring the same to battlefield. The arrow that had wounded Lakshmana was blessed in the way that whoever was wounded in the night with it could not recover if the cure was not obtained before daylight.

Hanuman knew this and was determined to bring it before the sun rose. The powerful Ravana compelled the sun to arise on the mountain at midnight. Hanuman being enraged at this conspiracy, leaped up and seizing sun's chariot placed the blazing god under his arm and put the mountain on his head. Only after the application of the desired herb on the wound of Lakshmana, Hanuman permitted the sun to depart.

Hanuman accompanied Rama on his return to Ayodhya and Rama gave him the blessings of perpetual youth and deathless existence. He was so intensely devoted to Rama and Sita that once he even tore up his chest with claws and showed that images of Rama and Sita were in his heart.

Shree Hanuman is believed to have received a boon from Shri Ram to become immortal for His sheer acts of worship and it is said that Shri Hanuman is always at an arm's length for anyone who seeks Him with the truest faith and sincere belief. Hanuman has always been associated with protection and welfare of our health especially for children and His legendary life-saving act of carrying the mountain that contained the miraculous herb Sanjivani that cured Lakshman is remembered even today.

How Hanuman tried to swallow the Sun

Lord Shiva was born into this world as Hanuman, the monkey god. His parents were Pawan, the Wind God, and his wife Anjana. Hanuman was a bundle of mischief when he was a child. He was very active. So he had a very healthy appetite too. Most of the time he was hungry. He was ready to eat anything that was tasty and within his reach.

Every day, an hour before dawn, Devi Anjana went out to collect some flowers and fruits. Usually Hanuman was asleep then. So she would leave him at home. And she would return before he woke up.

One day, she was held up on her way back. Hanuman woke up at the usual time. He was terribly hungry. He called out to his mother, "Ma I am hungry". He waited for his mother to run to him. That did not happen. Where are you, Ma? He said loudly. Still there was no reply. He waited a while; then called again. "Where has Ma gone so early in the morning? I am so hungry," grumbled Hanuman.

When he found no sign of Anjani he decided to find food on his own. He went into the kitchen. There was nothing there that he could eat. All the pots and pans and baskets were empty. Child Hanuman was getting hungrier and hungrier every minute.

Why should not I go out and get fruits to at?" he thought. He ran down the steps of his home. Then he noticed a red ball to the east. It was at some distance. It was the sun rising.

Hanuman watched the sight. It was beautiful. The whole sky was aglow with morning twilight; the sun looked like a big juicy fruit. Hanuman thought it was a big red ripe watermelon. & yumm... I have never eaten this fruit. Ma has never got it for me. I shall get it by myself. It is very big and I am sure it is just what I need now. I can't stay hungry any more.

Hanuman took a big leap. That took him close to the sun. He reached out for it. He almost had grabbed it. But he missed it.

He looked around. He noticed Rahu. Rahu hated the Sun. And when soever he got a chance, he caught the sun in its shadow. That was what he did now. This was what he had been doing since the time immemorial.

Today, he too reached out to cast his shadow on the sun. But Hanuman beat him to it. He held the son firmly in his hands. Rahu was furious. He tried to snatch the sun from Hanuman. But he failed.

Angrily he ran to Lord Indra the lord of all the Gods and complained, Oh! Lord! You gave me permission to cast shadow on the sun, at will. Today, I wanted to do that. But a young monkey snatched it from under my nose in the nick of the time" Lord Indra thundered, & "who is this rascal? Who is this little monkey that has dared to send you back. I shall teach him a lesson,"

Lord Indira went with Rahu. The two soon came to where Hanuman was holding the sun.

Hanuman was trying to swallow the sun. Indra got enraged. He drew his weapon, the Vajrayudh, and hurled at Hangman. It hit him below the chin. He blacked out and fell on the ground with a big thud.

Pawan, the wind god, saw him wounded. & "Who have done this to my son?& "he growled and turned. He saw the weapon returning to Lord Indra. He lost his temper. He screamed at Lord Indra, "How dare you hit my son? He picked up Hanuman and ran into a big cave. He gathered all the wind streams blowing in the universe and kept with him. The universe became empty airless. Not a whiff of wind moved wind anywhere. Soon it was impossible to breathe. All living things started to die. It looked as if all creations would come to an end.

"What brings you to me?" asked Brahma.

"You know Lord," said the Gods with folded hands.

"Yes I know. Didn't you know, Indra that Hanuman is none else but Lord Shiva in monkey form? He has gone to the earth to help Lord Rama in the battle against the demon Ravana. How can you hurt him?"

"I dindn't know, Oh lord. What should we do now?" asked Indra.

"Go to Lord Hanuman and ask for forgiveness. Also grant him some of your divine powers. Then Pawan will be happy," Lord Brahma suggested.

The Gods realized their folly. "Oh! We were fools to annoy the Lord Shiva and Pawan Dev." They hurried to the cave where Lord Hanuman and Pawan Dev were.

Lord Indra muttered some mantras and drew back the effect of the Vajrayudh that still held Hanuman unconscious. Hanuman woke up. He found the gods standing with folded arms. They sang his praise. One by one, they gifted immense power to him.

This made Pawan Dev happy. He released the air streams and life returned again on earth.

Gods returned to Heaven. Lord Hanuman ran back home. He found his mother, holding a basket full of fruits. He enjoyed the fruits while Pawan told Anjani,"Know what? Your son has become very powerful. All the gods came and gifted him some of their secret powers.

Does he need anything from others? Is he not Lord Shiva himself?" Anjani smiled. Pawan Dev bit his tongue and said, & Deva. I forgot. I always forget. I think of Hanuman as our little boy. My mistake."

Hanuman heard nothing. He was busy eating the last fruit in the basket.