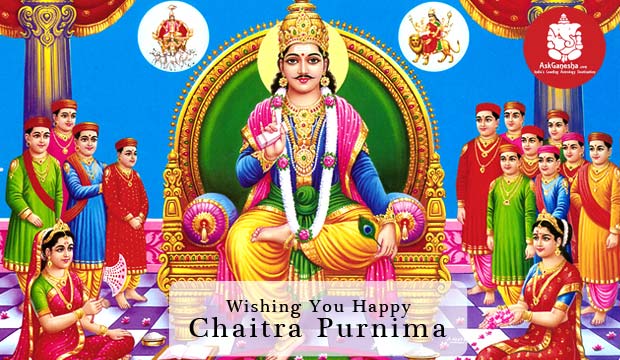 Chaitra Purnima, also known as Chait Poornima, is the full moon day in the month of Chaitra (March - April) in Hindu calendar. The Chaitra full moon day (March-April) is also observed as a holy day. It is the day which is dedicated to Chitragupta in South India. On this day Chitragupta who is the assistant of Yamaraj, who keeps the records of births and death in the whole world, is worshipped. He is Chitragupta who also makes the accounts of our good and bad actions in this world, according to which we are rewarded or punished. This occassion falls on the full moon day on the Chithirai Natchathiram. It is celebrated at night with the Swami Porappadu. On this day the Sarv Yoni Karmic puja is seen to have the best results. By doing this puja one is blessed by the Gods and the evil effects of the Karmas of a person of previous birth are also forgiven.


It assists us in self-analysis and guides us in maintaining good behaviour so as to obtain good rewards and avoid punishment after death. It tells us that a crime or wrong doing can be absolved if one regrets sincerely, vows not to repeat it, and prays to the Lord with apologetic heart, devotion and intense faith.

Chitragupta, basically means a "concealed picture". He presents a right depiction of our deeds after death. It is the day when your sins can be cleansed.

The twelve months of the Hindu year which are based on the lunar calendar, are identified after that star during whose ascendency the full moon of that month occurs. The full moon day of Chaitra month, that is, the Purnima during the ascendency of the Chitra star is particularly sacred to the Chitra Guptas, the recording angels of the Hindu pantheon. A special worship is offered to these celestial representatives of the god of death, and an offering of spiced rice is prepared and later distributed as prasad or holy sacrament. A fire worship is done at the close of the ritualistic worship. By the performance of this religious observance annually, these angels of the other world are greatly pleased and judge man's actions with more sympathy.

The day is dedicated to Indra, head of Devas.

At Kanchipuram, near Madras, the image of god Chitragupta is taken out in a procession and the devotees have a holy dip in the River Chitra flowing down the nearby hills.

People keep fasts on this day.

They offer food to the poor people and needy ones. Bad karma and deeds are recovered.

Rituals that are performed on Bhanu Saptami :