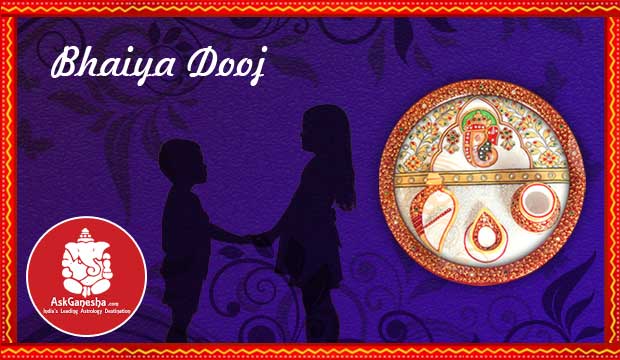 The upcoming schedule for Bhaiya Dooj is on dates: 27 October, 2022

In Bengali this festival is known as the Bhai Phota. This is the festival which strengthens the bond of love and respect between brothers and sisters.

On the day of Bhai Dooj, which is an auspicious day, the sisters put tilak on their brothers forehead and pray their long life. The brothers therefore promise the sisters to protect them from all dangers and to stand by their side forever. If we break the meaning of Bhai Dooj, it stands out as Brother and two days after the moon. Here, Bhai means brother and Dooj means two days after the new moon. On this day Ayusha puja done brings in long and healthy life for the person for whom the puja is performed. You can order this puja for your brother or sister from here.

The story runs that once there lived a brother and a sister in a far away village. The sister was quite elder than her brother and by the time the brother grew up, the sister was already married. So, when the brother grew up he hardly remembered about his sister. Now, it so happened that as he grew up he started missing his sister especially on the day of Bhai Dooj when he saw all the other boys being marked with a tilak on their forehead. The boy finally decided to visit his sister since his sister never came to visit them after marriage. The mother was not quite happy with her son going to meet his sister because there were immense obstacles that lay in the way. The boy started for his journey but in the way the level of water rose and there was also the danger of snakes. The boy requested the river and the snakes to drown and eat him in his return journey because he was now going to meet his sister. Both of them agreed. After this he came across the mountain which started to throw stones at him but there again he started to plead to the mountain to grant his life now so that he could meet his sister. The mountain also agreed to this. Hereafter, as he was about to reach his sisters house a tiger appeared before him who wanted to eat him but he requested the same as he did to others to which the tiger agreed.

Finally after crossing all the hurdles he reached his sisters house and saw her performing the Bhai Dooj puja. She was very elated and happy on seeing her brother after such a long time. She prepared special varieties of delicacies for him and offered him. Gradually with the passing of each day the time of returning to his home neared by and he told his sister the entire things that happened with him while he came to her place. Hearing this she was worried and decided to accompany her brother to home. She packed some meat for the tiger, some milk for the snake, some flowers of silver and gold for the mountain and some rice for the water. And she prayed accordingly to the tiger, mountain, snakes and river and offered them their respective things and in return asked them to not take away her brothers life. They agreed and finally both the brother and sister were very happy. Bit it so happened that on the way she felt thirsty and since there were some gypsies seen nearby she went there to ask for water. The gypsies predicted that the danger for her brothers life has not ended and many misfortunes are on the way for him. At this she asked them the solution and they told her that his life could be protected if she goes on cursing and abusing him till his marriage is done. She sooner started doing the same and the brother was taken by surprise. They reached their home and even there she continued cursing him. All the people were surprised at her rude behavior and all of them wanted her to go to her husbands house. But she would not leave. And at the day of his marriage when all the rituals started she demanded that all the rituals should be performed to her first. At her insistence , her mother did the same but was very unhappy with her actions. And it so happened with each ritual being performed on her first, her brothers misfortune was being washed away. Finally, their marriage was complete with the new bride coming home. Now, everyone wanted her to leave the place but before leaving she narrated the entire story to all the members and they were taken by shock. Tears rolled their eyes realizing that she did not care for her own life and worked towards saving her brothers life. And all the people echoed together saying that everyone should have a sister like her. From then the prevalent custom is that the brothers should not go to the sisters house for Bhai Dooj but instead the sister should come home for the occasion.

Each year Bhai Dooj is celebrated on the fifth day of Deepawali. The sisters perform aarti of their brothers and apply a vermilion mark on their forehead and pray for his well being. In return the brothers gifts their sisters with lavish surprises. There are also arrangements for mouth watering delicacies. Thus, Bhai Dooj is one of the important festivals amongst the Hindus celebrating the bond between the brothers and sisters.