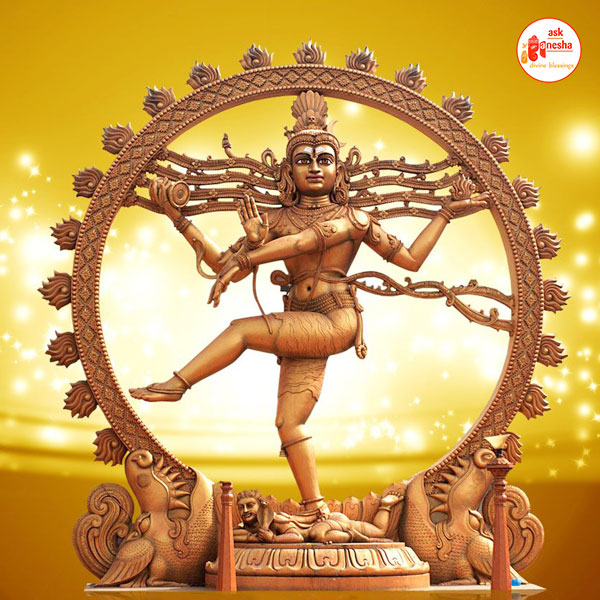 Lord Nataraja is the symbolic representation of Lord Shiva dancing who is known as the Lord of the dance.It symbolizes the connection between religion and the arts. His Puja is performed to gain his blessings while trying to improve upon one's artistic abilities and creative instincts.

Lord Nataraja is the symbolic representation of Lord Shiva dancing. The word 'Nataraj' means 'king of dance', wherein 'Nata' means 'dance' and 'Raja' means 'king'. Shiva's dance is called 'tandava' or 'nandata' depending upon the nature of his dance. The representation of Lord Nataraja varied from ages to ages. The scriptures show Lord Shiva dancing in one of the Natya Shastra poses. The classical form is depicted in Tamil Nadu's Chola bronze, typically 4 feet or above. Lord Nataraja is shown dancing in a classical way, holding his left leg over his right leg and thereby balancing his right foot standing on a lotus. He is surrounded by a ring of flames. He holds fire in one hand, while the front hand in gajahasta or dandhasta mudra. Another hand has a snake wrapped around it in a fearless manner. His head, ears, fingers, body, ankles, face and dress is shown decorated with jewels. Nataraja has special significance in Tamil Nadu.

Lord Nataraja symbolises the connection between religion and arts. It proves that Lord Shiva is the Lord of dance. While Shiva dances around the fire, he moves in a fearless manner ignoring all kinds of evil, ego and fears around him, it signifies spiritually unwavered by the materialistic elements. Nataraja is an amazing piece of art in Hindu Mythology and it has attracted many philosophers. It is a widely studied topic of Hindu art in the medieval era. Stone reliefs depicting Lord Natraja is found around the caves of India such as Ellora caves, Elephanta caves, and Badami caves around 6th century. The largest Nataraja statue is in Tamil Nadu.

Lord Nataraja Puja is performed to gain blessings of Lord Shiva while trying to improve upon one's artistic abilities and creative instincts. This puja helps in promoting good professional life and bring success by removing the malefic effects of the planets. This puja is performed by a well versed Purohit. Personalized Puja and Homam done only for you.