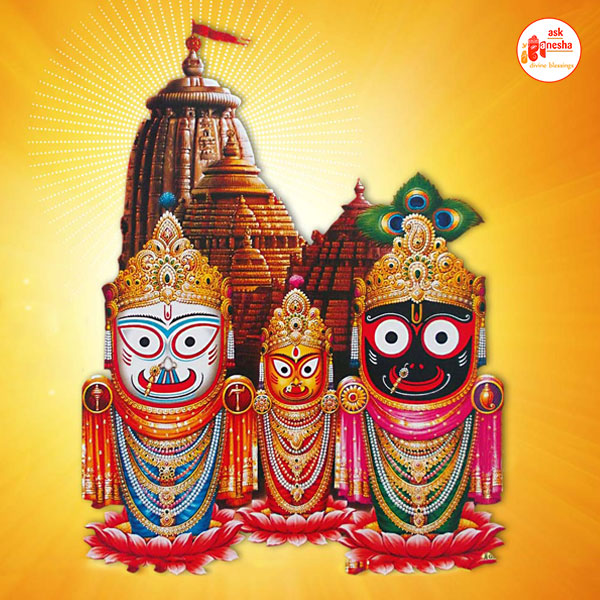 The icon of Lord Jagannath has a dark complexion while his brother and sister are white and orange in complexion respectively. The trio is seated on a jewelled platform and are carved in a wooden stature having large, big eyes and with stumps as hands. The legs of the diety are not depicted in the icon. The rituals and worship procedures are very different from those of classical Hindu diety. Also Lord Jagannath is carved on wood whereas the other Hindu diety are made of metal of stone. The origin of Lord Jagannath lacks a clear vedic reference, the evolution has been subject to contradictory views and debate. The most famous temple of Lord Jagannath is established in Puri. This temple is included in the most important Hindu Pilgrimage places also known as Char Dham in India. This temple is known as the shriMandir to the devotees. As per the tradition, non Hindus are prohibited to enter the temple. There are many more Jagannath temples all over India, Bangladesh and Pakistan. In the Baisakh temple of Bali, located in Indonesia, an ancient idol of Jagannath has been found. In Puri, Lord Jagannath is celebrated with a pomp in a festival known as RathYatra where the trio, Lord Jagannath along with his two deities, comes out of the Garbhagriha of the chief temple (BadaDeula) are transported to Gundichatemple, 3 kms away in three chariot drawn by the devotees.

It is believed that worshipping Lord Jagannath with a pure heart can fulfil all the wishes of the devotees and any kind of hurdle coming in the way of an important work can be easily removed. The Puja requires chanting of mantras by the devotees, which can also be performed by a Purohit.