Partial Solar Eclipse is visible in India on Oct 25, 2022

This will be the second Solar Eclipse of the year 2022. Similar to the April 30 Solar Eclipse, it will be partial, as only 26.6 % of the Sun's surface will be covered by the Moon.

And unlike the last Solar eclipse, it can be seen in India from Akola, Maharashtra.

The eclipse begins at 16:48 and ends at 17:50 time. So it will be for 1 hr and 2 minutes duration. The best time to get a clear view of the eclipse would be 17:41 in the West-southwest direction. As the Moon will be closest to the centre of the Sun at that time.

What is Solar Eclipse

A solar eclipse occurs when the revolving Moon comes in between the Earth and the Sun. Then the moon covers the Sun either totally or partially.

When the Moon, the Sun and the Earth align in a straight line a total eclipse is formed. The Moon covers the entire disk of the sun, casting its shadow on the earth. The dark core of the shadow that it forms on the earth is called Umbra. If you are within the Moon's umbra and look in the direction of the Sun, you may be able to see the diamond ring effect.

Total solar eclipses appear lesser than Partial because Moon's umbra rarely reaches the Earth's surface. Even if Umbra hits, it covers only a small area on Earth. For example, the total solar eclipse on April 8, 2024, will be visible along a narrow stretch across the United States, Mexico, and Canada.

Whereas in a Partial Solar Eclipse the Moon obstructs the view of the Sun partly. It looks as if the Moon has eaten a fragment of the Sun.

However, directly we should not look at the Solar eclipse. It is very dangerous and can result in retinal damage. 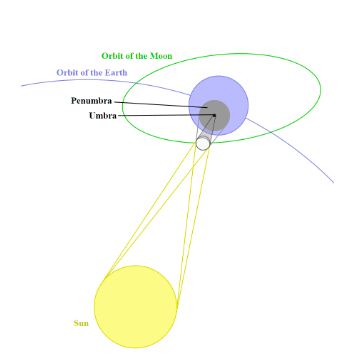 While the eclipse study in the astronomical world can reveal many fascinating facets of the galaxy, it also plays an extremely significant role in astrology. The solar eclipse's energy is so powerful, that it is best not to oppose it, rather move along with it. The torrid that you will experience will eventually lead to self-exploration. Which you can utilise to change the course of your life for betterment.

As per Vedic astrology also the North Node of the Moon, Rahu causes a Solar eclipse.

However, every Solar eclipse is not going to affect you in the same way it depends on its connection with your Natal Chart. To understand the effect of Solar eclipse an astrologer thoroughly looks into the Sun, Moon and the ascending sign in the chart. Also its correlation with the other planetary positions (like Mercury, Venus and Mars), houses and angles in the horoscope. 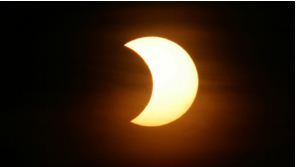 Why Solar eclipse is regarded as inauspicious

When the sun under the Solar eclipse gets covered by the Moon it is not an auspicious thing in astrology. The Sun represents authority, Father, and the soul's power, its attributes give us energy, willpower, and the ability to fight all evils or diseases. Now when the Sun gets covered by the moon during an eclipse it brings drastic unexpected changes. Most of the time it ends something in life and then propels a new beginning. It depends on its position in the natal chart. Affects particularly those whose birth or death takes place during the eclipse time period.

It is believed, that Sutak rules should be followed, strictly during the total eclipse time in the region from where it can be seen. The term Sutak or Patak is related to birth or death as mentioned in the Garuda Purana. Basically, they are isolation rules for members of the house where birth or death has taken place.

There is no religious reason for Sutak, in fact it is purely to prevent any possible infection from spreading. It has been established medically also that the contamination chances are high during birth or death.

The 12 hours before Solar Eclipse is also known as Sutak. As per the Hindu belief, Earth's atmosphere is contaminated during eclipse Sutak and extra precautions should be taken to avoid any side effects. The Solar eclipse on October 25, 2022, is visible in India at a certain time, so ideally Sutak should be followed for this partial eclipse.

You can recite the Surya mantra or Gayatri Mantra on eclipse day.

In ancient times people would avoid eating solid and liquid food items during Sutak time. Many still follow the rule during Grahan or eclipse time if it is required.

It is not applicable for children, pregnant women, sick and old people food.

You need an expert astrologer to tell if its a good or bad eclipse for you. They can inform about its effects and remedies based on the magnitude of Surya Grahan Dosha or the Solar eclipse's influence on your Kundli or natal Chart.