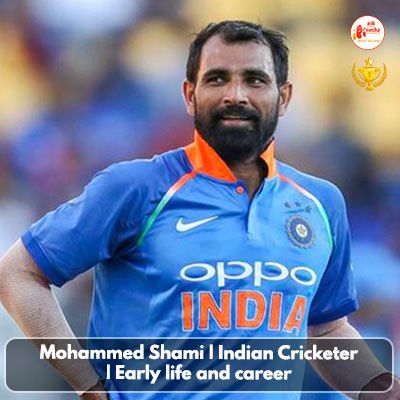 Who is Mohammed Shami?

Mohammed Shami is Indian International cricket player. In domestic cricket he represents the Bengal team. He is a right-arm fast-medium swing and seam bowler, who bowls consistently around the 85 mph (140km/h) mark. which makes him a deceptively potent fast bowler. He is infamously known for his reverse swing. His debut match was against Pakistan in the year 2013. He showed his true caliber in his first match itself where he, as a bowler bowled 4 maiden overs (the overs with no runs). This was a record in itself.

His birth is of 3rd September 1990. He was born in the family of farmer, his father Tousif, was himself a fast bowler, in the days of his prime. It is so ironic that all the members of his family happen to be fast bowlers in their own might. Also it was in the year 2005, when the father saw the true potential and talent of his boy in the arena of fast bowling. That he took him to a cricket Coach named- Badruddin Siddique in Moradabad, which was like 22 kms away from his village. Unfortunately he was not selected in the squad that represented UP for U-19 Cup (the Tournament that is held for players who are Under 19 years of Age). Not letting him loose his heart, his coach sent Shami to play from team Kolkata. The year 2005, proved to be a good year for him. He started to play for Dalhousie Athletic Club. Where he impressed Debabrata Das, - the ex Assistant Secretary of Cricket Association of Bengal. Mr. Das was so impressed with Shamis bowling style that he instantly made a spot for him into his Town club team and also signed a contract of Rs. 75,000. After playing for town club, Das Sent Shami to the Mohun Bagan Club in order to get selected for the Indian team. During his tryouts he was, told to bowl to Saurav Ganguly in Eden Garden ground. He even impressed the selectors and Sourav Ganguly, and was selected for Ranji Trophy in the year 2010.

The domestic debut career of Shami as an adult Started in the year 2010. This debut match was against team Assam, where he picked up 3 Wickets. Hence, the repercussion of this performance was seen in the year 2012. When he was selected in the A league, of Indian team to play against West Indies. Although, in this Series he made a match- Wining partnership ship of 73 runs with Cheteshwar Pujara. This was in the unofficial test match that was played between India A and West Indies in the year 2012. In the year 2012-13, in a match against Hyderabad, in the green Eden Garden stadium, he took 4/36 and 6/71, and scored 15 runs not out from 6 balls in the second innings. This innings lead his team towards a path of victory, that too by 4 wickets and his team partner Wriddhiman Saha. During the same series, while bowling he took 7 wickets, in the first innings and 4 wickets in the second innings against Madhya Pradesh at Holkar cricket stadium in Indore. Although, these efforts were all in vain as Shamis team lost by a whopping 138 runs, in the first innings.

Because of his good performance, in domestic field, it got him a place in the ODI squad of India. Shami was selected in the Indian ODI series against Pakistan, replacing his Bengali team mates Ashok Dinda. On the 6th of January 2013 he made his debut, and returned with figures such taking 1 wicket from 23 runs in 9 overs. He was selected Australia tour of India in October 2013. In this series he sat out for 3 matches and then in the fourth match he was given a chance and he took 3 wickets. When the match between Newzeland and India was played in 2014 Shami picked 11 wickets with the average of 28.72

The Real innings for Mohammed Shami began when he was selected for the 15- men Squad of Indian cricket team to play for ICC World cup 2015. He proved his might in this series when Shami picked up 4 wickets in 9 overs giving 35 runs to score. This was against the arch- rival Pakistan. In the second match against South Africa. Although, he had finished his innings by giving 30 runs in 8 overs and picking 2 wickets. The man of the match trophy came his way after finishing his match with these figures like 8-2-35-3. This was against West Indies. Mohammed Shami was seen at his best in the last leg of league games, against Zimbabwe. Where he took 3- wickets giving 48 runs and this was done in merely 9 overs. These 9 overs included two maiden overs as well. India went on to win the league games.

Though his professional life has been full of accolades, unfortunately same cannot be said for his personal life. His personal life has been full of ups and downs. Viewing the recent events, mostly downs. 9th March 2018, an FIR was lodged by his wife against Shami and other members of his family. The complaint stated a case of Domestic Violence and adultery, on the part of Shamis Family and Shami respectively. Because of these allegations BCCI withheld all their national contracts of Shami. It was on 22nd March 2018, that the BCCI cleared all his central contracts only after he got a clean chit from Anti Corruption Unit (ACU). Apart from his personal life his professional life has given him name fame and rewards. We wish him luck and hope that everything will be fine.
Share: